Let’s interpolate Jesus’ “Parable of the Unjust Steward” to illustrate to us the correct way of viewing, discerning, and executing the spiritual supernatural message of salvation contained in all of His parables about the kingdom of God/heaven that is present on earth at this time and Christ’s judgment of what is yet to come. This parable illustrates the process of miss directed counterfeit sanctification using worldly common sense which leads to eternal condemnation. (1)
(1) WOE TO the rebellious children, says the Lord, who take counsel and carry out a plan, but not Mine, and who make a league and pour out a drink offering, but not of My Spirit, thus adding sin to sin; (Isaiah 30:1) AMP

The Parable of the Unjust Steward: 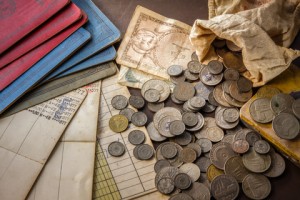 © Parable of the Unjust Steward.

He also said to His disciples: “There was a certain rich man {Jesus Christ Who is heir to ALL things.} who had a steward, and an accusation was brought to him that this man was wasting his goods.  So he called him and said to him, ‘What is this I hear about you? Give an account of your stewardship, for you can no longer be steward.’
“Then the steward said within himself, ‘What shall I do? For my master is taking the stewardship away from me. I cannot dig; I am ashamed to beg. I have resolved what to do, that when I am put out of the stewardship, they may receive me into their houses.’
“So he called every one of his master’s debtors to him, and said to the first, ‘How much do you owe my master?’ And he said, ‘A hundred measures of oil.’ So he said to him, ‘Take your bill, and sit down quickly and write fifty.’ Then he said to another, ‘And how much do you owe?’ So he said, ‘A hundred measures of wheat.’ And he said to him, ‘Take your bill, and write eighty.’ So the master commended the unjust steward because he had dealt shrewdly. For the sons of this world {Satan} are more shrewd in their generation than the sons of light {God}.
“And I say to you, make friends for yourselves by unrighteous mammon, that when you fail, they may receive you into an everlasting home. He who is faithful in what is least is faithful also in much; and he who is unjust in what is least is unjust also in much. Therefore if you have not been faithful in the unrighteous mammon, who will commit to your trust the true riches? And if you have not been faithful in what is another man’s, who will give you what is your own?
“No servant can serve two masters; for either he will hate the one and love the other, or else he will be loyal to the one and despise the other. You cannot serve God and mammon.”
The Law, the Prophets, and the kingdom. Now the Pharisees, who were lovers of money, also heard all these things, and they derided Him. And He said to them, “You are those who justify yourselves before men, but God knows your hearts. For what is highly esteemed among men is an abomination in the sight of God.
“The law and the prophets were until John. Since that time the kingdom of God/heaven has been preached, and everyone is pressing into it.” (Luke 16:1-16) NKJV

The interpolation of the “Parable of the Unjust Steward” calls into play the spiritual supernatural Biblical Christian Worldview and the revealing of someone who thought they were a True Believer who in reality was actually a Make Believer with Christ’s judgment as such. Again, I am interpolating the shrewd steward/manager as the older son from the “Parable of the Prodigal Son.” He has been a part of his Father’s household/kingdom and is a co-heir of everything his Father has, but what we need to determine is his worldview as to how he resolves the God ordained circumstances that he in his mindset and faith has gotten himself into. Will he use a profane secular humanistic worldview of a Make Believer/Unbeliever or a spiritual supernatural Biblical Christian Worldview of a True Believer?

It seems upon his Father’s investigations, the older son was involved in some worldly shenanigans with others in the Father’s household that resulted in the accounts in the books not being balanced i.e. he was not morally {holy} and ethically responsible {righteous acting} in his position. His Father removed him from his position of manager of His household/kingdom, but using his profane secular humanistic worldview, the older son figured out how to “cook the books” so that if his Father wouldn’t allow him to be the manager, he could at least cover over the collusion of the unethical behavior between him and others so they would allow him to live with them in their household/kingdom of the world. Rather than repenting and seeking his Father’s forgiveness, his profane secular humanistic worldview and heart was to go back and rejoin those of the world giving him a home in the kingdom of the world rather than witnessing to and saving the lost souls/sinners of the world giving him an eternal home with God in the kingdom of God/heaven.

The older son in his profane secular humanistic worldview definitely is linked to Satan – the god of this world and the monetary things of this world because his Father continued saying, “No servant is able to serve two masters; for either he will hate the one and love the other, or he will stand by and be devoted to the one and despise the other. You cannot serve God and mammon.” (Luke 16:13) NKJV (3)
(3) For all that is in the world — the lust of the flesh, the lust of the eyes, and the pride of life — is not of the Father but is of the world. (1 John 2:16) NKJV

Jesus gave us the spiritual supernatural interpolation of this parable when He sized up the profane adulterated worldview of those listening to Him who loved money and the prestige, power, and position that it appears to help one attain. And He said to them, “You are those who justify yourselves before men, but God knows your hearts. For what is highly esteemed among men is an abomination in the sight of God”. (Luke 16:15) NKJV

And then Jesus added the “kicker” when He summed it all up comparing the world’s profane secular humanistic approach to solving one’s problems to God’s spiritual supernatural intervention in one’s problems saying, “Until John came, there were the Law and the Prophets; since then the good news (the Gospel) of the kingdom of God/heaven is being preached, and everyone strives violently to go in [would force his own way rather than God’s way into it]. (Luke 16:16) AMP {Notice that Luke 16:16 in other translations is diametrically different than AMP.}

In conclusion of this set of parables, the younger son repented of his sins and became a “Born Again” adopted Child of God – a Believer in Jesus Christ as his Savior. The older son who thought that he was a Believer was actually a wolf in sheep’s clothing – a Make Believer. (4) He acted like he was working in the spiritual supernatural kingdom of God/heaven but in actuality, he was attempting to work in the spiritual supernatural kingdom of God/heaven but with a secular humanistic worldview. His Father passed judgment on him for who he was – a Make Believer/Unbeliever whose judgment will be eternal separation from God. (5)
(4) Beware of false prophets, who come to you dressed as sheep, but inside they are devouring wolves.  [Ezek 22:27.] You will fully recognize them by their fruits. Do people pick grapes from thorns, or figs from thistles? Even so, every healthy (sound) tree bears good fruit [worthy of admiration], but the sickly (decaying, worthless) tree bears bad (worthless) fruit. A good (healthy) tree cannot bear bad (worthless) fruit, nor can a bad (diseased) tree bear excellent fruit [worthy of admiration]. Every tree that does not bear good fruit is cut down and cast into the fire. Therefore, you will fully know them by their fruits. (Matthew 7:15-20) AMP
(5) He who believes in the Son of God [who adheres to, trusts in, and relies on Him] has the testimony [possesses this divine attestation] within himself. He who does not believe God [in this way] has made Him out to be and represented Him as a liar, because he has not believed (put his faith in, adhered to, and relied on) the evidence (the testimony) that God has borne regarding His Son. (1 John 5:10) AMP