From this booklet, I pray that you have learned what happened BEFORE time began. Man guesstimates that time began some 15 billion years ago. If you can understand the implication this has on my preceding assumptions, then you will see that this is what makes God unchangeable. He cannot change His mind on something that He planned billions of years ago! He has relented on a “very, very, very few of His foreknown plans but this does NOT change the overall picture of His plans. 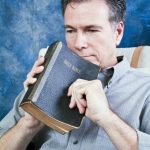 We have studied and should now know that God’s foreknow and predestined plans are for ALL parts of His creation and were written in His complete Book of Life from BEFORE time began. We have learned that God FIRST loved us and knew our individual concept and plans for us from BEFORE time began. We have learned the order, structure, and purpose of the Triune God and how it has been and is still working through time and history.

We should know that Eve is the mother of all the living, and that she shared with us the template for human reproduction that started with her – husband/man and wife/woman have natural coitus resulting in an offspring with the help of God the Holy Spirit. At the time of conception, the Holy Spirit also forms the human spirit in the new offspring. This spirit returns to God upon the offspring’s death. I believe that while the person is alive their spirit can either communicate with the Satanic and the demonic spiritual realm, or IF and WHEN that person accepts Jesus Christ as their personal Savior, they are then able to spiritually communicate with God the Holy Spirit, His Word, and His Kingdom.

God the Father FIRST loved us and had all of our plans written in His Book of Life from BEFORE time and history began. Down through the successive ages of time and history God the Holy Spirit brings to fruition the foreknown and predestined plans of God the Father for each person as He is allowed by that person. As people  use contraceptives, abortion, and homosexuality for their pleasure, this causes much sorrow for God and His foreknown and predestined plans. I believe He foreknew what sin would do to His “very good” creation. That is why He included His “Gospel Message” in the stars to help us know and understand His omniscience.

I believe man’s use of technology started in Genesis 4:20-22 and was used for many things for a while. Think of the human ingenuity needed to build Noah’s Arc, the Tower of Babel, etc . Sometime during the Middle Ages – 500AD – 1500AD there was a lot of wars to disrupt man’s good use of technology until the late 1700’s. From that time into the 1900’s and through the present age, man’s use of technology has skyrocketed astronomically! Even to the point of creating human life in the late 1970’s. I believe this man made human engineering while producing a “supposedly normal living human baby” does NOT!!! These human engineered babies do NOT have a God formed spirit! Thus they are spiritual BASTARDS and have no place in God’s foreknown and predestined plans! Do not forget that a man created baby without a spirit is spiritually dead! I believe that before a person accepts Jesus Christ as their personal Savior, the spirit was dead towards God but not towards the demonic spiritual realm. I believe this means that person without a spirit cannot have spiritual fellowship with God. I believe this is an unpardonable sin for one human to perpetuate on another human!

James 2:26 For just as the body without the spirit is dead, so also faith without works is dead. NASU

Now look at the last part of the verse where it says, “faith without works is dead.” If one does NOT have a human spirit and is spiritually dead, how can they have FAITH in God?

What I am trying to bring to light is the cunningness of the owners and operators of IVF businesses who are whether knowingly or unknowingly fraudulently deceiving their clients – their seemingly complete babies are NOT the same as naturally conceived babies because they do NOT possess a human spirit formed by God!

The operators of AI and IVF businesses are achieving one of the biggest sins and frauds against their fellow man – the creating of an incomplete living human baby, a human being without a spirit. A person that cannot spiritually communicate with God nor understand their need as a sinner for our Savior – Jesus Christ is spiritually dead. They have eliminated the need for God from that person’s life.

Believe it or not, but I believe there are Scriptures that acknowledge this happening. These “spiritless” humans will be “left behind” after the rapture because they could not identify themselves to God the Holy Spirit.

In closing, why did Jesus ONLY share with the populace in parables? It was because the people could NOT understand spiritual Kingdom of God teaching! They could ONLY understand worldly/secular teaching much like most of the peoples of the world including many so called Christians in Christ’s Church!

Matthew 13:10-11 Then the disciples came to Him {Jesus Christ} and said, Why do You speak to them {public} in parables? 11 And He replied to them, To you it has been given to know the secrets and mysteries of the kingdom of heaven, but to them it has not been given. AMP

Matthew 13:52 He {Jesus Christ} said to them, Therefore every teacher and interpreter of the Sacred Writings who has been instructed about and trained for the kingdom of heaven and has become a disciple is like a householder who brings forth out of his storehouse treasure that is new and [treasure that is] old [the fresh as well as the familiar]. AMP

I believe man’s ways are becoming more deviant, shrewd and sharp-witted as we get closer to Christ’s Second Coming.

2 Timothy 3:1-5 BUT UNDERSTAND this, that in the last days will come (set in) perilous times of great stress and trouble [hard to deal with and hard to bear]. 2 For people will be lovers of self and [utterly] self-centered, lovers of money and aroused by an inordinate [greedy] desire for wealth, proud and arrogant and contemptuous boasters. They will be abusive (blasphemous, scoffing), disobedient to parents, ungrateful, unholy and profane. 3 [They will be] without natural [human] affection (callous and inhuman), relentless (admitting of no truce or appeasement); [they will be] slanderers (false accusers, troublemakers), intemperate and loose in morals and conduct, uncontrolled and fierce, haters of good. 4 [They will be] treacherous [betrayers], rash, [and] inflated with self-conceit. [They will be] lovers of sensual pleasures and vain amusements more than and rather than lovers of God. 5 For [although] they hold a form of piety (true religion), they deny and reject and are strangers to the power of it [their conduct belies the genuineness of their profession]. Avoid [all] such people [turn away from them]. AMP

But man’s ethics and morals – his dishonesty and deception has been around from Day One.  Let me share a Scripture with you as to how wickedly deceptive man’s thinking has been from the beginning of his creation.

Genesis 6:5-7 The Lord saw that the wickedness of man was great in the earth, and that every imagination and intention of all human thinking was only evil continually. 6 And the Lord regretted that He had made man on the earth, and He was grieved at heart. 7 So the Lord said, I will destroy, blot out, and wipe away mankind, whom I have created from the face of the ground — not only man, [but] the beasts and the creeping things and the birds of the air — for it grieves Me and makes Me regretful that I have made them. AMP

Here is a modern example of man’s cunningness and deception towards another man. This deception cost General Motors Corp over 40 million dollars in litigation costs which is MORE than 10 times that amount in 2019 dollars. In 1949, the Oldsmobile Division of General Motors Corp. produced and introduced to the public their first new V8 engine which they called the “Rocket V8.” Over the following 25 plus years, this engine garnered a large and loyal following of car enthusiasts. To them, it could not get any better than to have an Oldsmobile 88 or Oldsmobile 98 automobile with a “Rocket V8 Engine!”

I pray that this study has helped YOU to realize that the morals and ethics of man are NOT God’s morals and ethics nor His thoughts and ways. May this help you to completely commit your life to God to bring Him glory, honor, and praise as He is revealed in your life!

CHAPT 6 – The Human Engineered Processes for Artificial Insemination and In Vitro Fertilization in Human Reproduction.

CHAPT 5 – How is God Involved in Human Reproduction?

CHAPT 4 – Let’s Watch God’s Plans for You Unfold Througout the Successive Ages from Before Time Began.

You may have missed

Which Kingdom Has Precedence in Your Life?

The MYSTERY of Original Adam Revealed