Let’s interpolate Jesus’ “Parable of the Minas” to illustrate to us the correct way of viewing, discerning, and executing the spiritual supernatural message of salvation contained in all of His parables about the kingdom of God/heaven that is present on earth at this time and Christ’s judgment of what is yet to come. This parable illustrates the spiritual processes of sanctification, eternal glorification, and eternal condemnation.

I will now compare the “Parable of the Minas” to the “Parable of the Talents.”  I ask you to see the absoluteness of God’s judgment of eternal condemnation for those who fail to win lost souls/ sinners to Jesus Christ. These parables appear to be almost identical, but yet they are quite different. Can you discern their differences?

The Parable of the Minas: 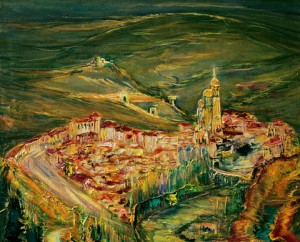 The Parable of the Minas (Matthew 25:14-30) Now as they heard these things, He spoke another parable, because He was near Jerusalem and because they thought the kingdom of God would appear immediately. Therefore He said: “A certain nobleman went into a far country to receive for himself a kingdom and to return.  So he called ten of his servants, delivered to them ten minas, and said to them, ‘Do business till I come.’ But his citizens hated him, and sent a delegation after him, saying, ‘We will not have this man to reign over us.’
“And so it was that when he returned, having received the kingdom, he then commanded these servants, to whom he had given the money, to be called to him, that he might know how much every man had gained by trading. Then came the first, saying, ‘Master, your mina has earned ten minas.’ And he said to him, ‘Well done, good servant; because you were faithful in a very little, have authority over ten cities.’ And the second came, saying, ‘Master, your mina has earned five minas.’ Likewise he said to him, ‘You also be over five cities.’
“Then another came, saying, ‘Master, here is your mina, which I have kept put away in a handkerchief.  For I feared you, because you are an austere man. You collect what you did not deposit, and reap what you did not sow.’ And he said to him, ‘Out of your own mouth I will judge you, you wicked servant. You knew that I was an austere man, collecting what I did not deposit and reaping what I did not sow. Why then did you not put my money in the bank, that at my coming I might have collected it with interest?’
“And he said to those who stood by, ‘Take the mina from him, and give it to him who has ten minas.’  (But they said to him, ‘Master, he has ten minas.’)  ‘For I say to you, that to everyone who has will be given; and from him who does not have, even what he has will be taken away from him.  But bring here those enemies of mine, who did not want me to reign over them, and slay them before me.'” (Luke 19:11-27) NKJV

It is interesting as to how the people looked at Jesus’ teaching of this parable. Somehow they felt that the kingdom of God was going to be physically revealed “immediately” which it was! (1)
(1) They thought the kingdom of God would appear immediately. (Luke 19:11) NKJV
(1a) This is what the Parables are about – introducing to us the kingdom of God/heaven.
Another parable He set forth before them, saying, The kingdom of heaven is like a man who sowed good seed in his field. (Matthew 13:24) AMP

What they did NOT perceive was that the spiritual kingdom of God and the work of its citizens/ Saints and their judgment was at hand and would be revealed in this parable.

This parable reveals something similar to the parable of the “Wheat and the Tares” – having True Believers and Make Believers in God’s kingdom here on earth – the Christian Church. This nobleman – Jesus Christ – came to set up and expand His kingdom here on earth which in reality is the Christian Church. Jesus called 10 of his supposedly justified and now sanctified “servants” together, gave them 10 minas – one apiece. He gave all of them the same instructions – “Do business till I come.” Ten is a complete number thus meaning that His disciples do their sanctifying work all around the world of winning as many sinners as possible and discipling them to Jesus Christ as their personal Savior, Lord God, and Master.

The rest is pretty much the SAME as the Parables of the Talents. While BOTH the “Parable of the Minas” and the “Parable of the Talents” seem to infer to money and its bearing interest – “And he said to him, ‘Out of your own mouth I will judge you, you wicked servant. You knew that I was an austere man, collecting what I did not deposit and reaping what I did not sow. Why then did you not put my money in the bank, that at my coming I might have collected it with interest?’ (Luke 19:22-23) NKJV But this is not the correct interpolation.

When Jesus Christ came back to receive His kingdom – His Second Coming whereby He passes judgment upon His people. (3)
(3) But the Lord {Jesus Christ} shall remain and continue forever; He has prepared and established His throne for judgment.  [Heb 1:{8}, 11.] (a) And He will judge the world in righteousness (rightness and equity); He will minister justice to the peoples in uprightness.  [Acts 17:31.] (Psalms 9:7-8) AMP
(a) But as to {God} the Son, He {God the Father} says to Him, Your throne, O God, is forever and ever (to the ages of the ages), and the scepter of Your kingdom is a scepter of absolute righteousness (of justice and straightforwardness). (Hebrews 1:8) AMP
(aa) They will perish, but You{Jesus Christ}remain and continue permanently; they will all grow old and wear out like a garment. (Hebrews 1:11) AMP
(3a) Because He {God the Father} has fixed a day when He will judge the world righteously (justly) by a Man {Jesus Christ} Whom He has destined and appointed for that task, and He has made this credible and given conviction and assurance and evidence to everyone by raising Him from the dead.  [Ps 9:8; 96:13; 98:9.]             (Acts 17:31) AMP

But there are two significant differences between the “Parable of the Talents” and the “Parable of the Minas.” The first difference is revealed in the true feelings of Christ’s adopted children – those who have supposedly accepted Him as their Savior. They are actually Make Believers unwilling to accept Him as their Lord God and Master! “But some of his people hated him and sent him their declaration of independence, stating that they had rebelled and would not acknowledge him as their king.” (4) (Luke 19:14) TLB
(4) And on His {Jesus’} garment (robe) and on His thigh He has a name (title) inscribed, King Of Kings And Lord Of Lords.  [Deut 10:17; Dan 2:47.] (Revelation 19:16) AMP

This same message still remains true for today, but not only in The Christian Church but now also includes the world! When any reference to the Bible or any mention of the true living loving God and His Son – Jesus Christ is uttered in public, it is met with downright disdain, outrage,  even hostilities towards and against those who are bold enough to stand firm in their witness for Jesus Christ. But do not let that dissuade you from standing firm in your testimony for Jesus Christ to your fellow Saints in The Christian Church or to the lost sinners in the world. (5) It is interesting that any mention be made whether in The Christian Church or in the world about Allah, Buddha, or any other false god, it is accepted with open arms. (6)
(5) Blessed (happy, to be envied, and spiritually prosperous — with life-joy and satisfaction in God’s favor and salvation, regardless of your outward conditions) are you when people revile you and persecute you and say all kinds of evil things against you falsely on My account. Be glad and supremely joyful, for your reward in heaven is great (strong and intense), for in this same way people persecuted the prophets who were before you.  [2 Chronicles 36:16.] (Matthew 5:11-12) AMP
(5a) The World’s Hatred. “If the world hates you, you know that it hated Me before it hated you. If you were of the world, the world would love its own. Yet because you are not of the world, but I chose you out of the world, therefore the world hates you. Remember the word that I said to you, ‘A servant is not greater than his master.’ If they persecuted Me, they will also persecute you. If they kept My word, they will keep yours also. (John 15:18-20) NKJV
(6) You seem so gullible: you believe whatever anyone tells you even if he is preaching about another Jesus than the one we preach, or a different spirit than the Holy Spirit you received, or shows you a different way to be saved. You swallow it all.                    (2 Corinthians 11:4) TLB

But let’s compare the final judgment of the servants/Make Believers in the “Parable of the Minas” – Christ’s enemies – those who did not want Him to reign over them as their King in His kingdom here on earth – The Christian Church. The twist comes with the difference and magnitude of the judgment of the Make Believers/His enemies, “But bring here those enemies of mine, who did not want me to reign over them, and slay them before me.” (Luke 19:27) NKJV This seemingly is a significantly higher, more severe level of judgment than was received by the unfruitful Make Believer in the “Parable of the Talents.”  “And throw the good-for-nothing servant into the outer darkness; there will be weeping and grinding of teeth. (Matthew 25:30) AMP What I do know is that anyone who does not accept Jesus Christ as their personal Savior leading for Him to become their Lord God and Master will be separated from God for all of eternity in Hell!

I believe Jesus is sharing in this parable that history can and does repeat itself! He is the King of Kings and the Lord of lords! He is in absolute control and authority over His kingdom at all times! No one will take that title and position away from Him as the King/Head of His Bride Church!

As I have been sharing throughout this book. God is totally Sovereign over His creation and He will bring to fruition what He has foreknown, preplanned, and predestined. Any church or denomination who does not have Jesus Christ as the King/Head of the entity is in for a horrible judgment and punishment. They are guilty of blasphemy of Jesus Christ which He will forgive them. But if they do not recognize their sin and repent, they are guilty of an unforgivable sin. There is too much of The Christian Church who does not outwardly acknowledge/testify of Jesus Christ as their Savior, Lord God, and Master. (8)
(8) Therefore, everyone who acknowledges Me before men and confesses Me [out of a state of oneness with Me], I will also acknowledge him before My Father Who is in heaven and confess [that I am abiding in] him. But whoever denies and disowns Me before men, I also will deny and disown him before My Father Who is in heaven. (Matthew 10:32-33) AMP
(8a) Confess Christ Before Men. (Matt 10:32, 33) “Also I say to you, whoever confesses Me before men, him the Son of Man also will confess before the angels of God.  But he who denies Me before men will be denied before the angels of God. “And anyone who speaks a word against the Son of Man, it will be forgiven him; but to him who blasphemes against the Holy Spirit, it will not be forgiven. (Luke 12:8-10) NKJV