Let’s interpolate Jesus’ “Parable of the Lost Sheep” to illustrate to us the correct way of viewing, discerning, and executing the spiritual supernatural message of salvation contained in all of His parables about the kingdom of God/heaven that is present on earth at this time. This parable illustrates to us the importance of the spiritual process of justification.

The Parable of the Lost Sheep: 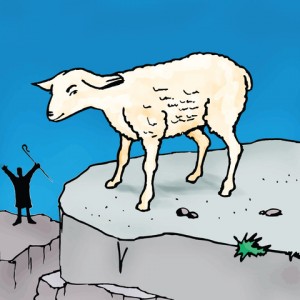 © Parable of the Lost Sheep.

So He {Jesus} spoke this parable to them, saying: “What man of you, having a hundred sheep, if he loses one of them, does not leave the ninety-nine in the wilderness, and go after the one which is lost until he finds it?  And when he has found it, he lays it on his shoulders, rejoicing.  And when he comes home, he calls together his friends and neighbors, saying to them, ‘Rejoice with me, for I have found my sheep which was lost!’  I say to you that likewise there will be more joy in heaven over one sinner who repents than over ninety-nine just persons who need no repentance.” (Luke 15:3-7) NKJV

In this parable, most people of Jesus’ time raised and cared for animals and knew their value for their family for food and clothing and for their livelihood to barter with their neighbors for their other necessities. He uses something the people knew had great physical value/worth – sheep as His physical “living material things hook.” Hook as used here means Jesus used a living creature that had physical value/worth to get the attention of His hearers. If a shepherd (usually a male) lost just one sheep out of 100 sheep, he would diligently search for it because of its great physical value/worth until he found it, and when he found the sheep that had gone astray, there would be great rejoicing because of the recovery of the animal which will now be returned to the other ninety nine sheep as part of his overall physical property/wealth.

Jesus spiritually and supernaturally interpolates this parable when He compares God’s value of a condemned lost sinner to a lost living sheep of great physical value/worth to its owner. The condemned lost sinner has greater spiritual value/worth to God (1) Who diligently searches for, finds, and works to convict that sinner (2) to receive salvation/be saved thus participating in the process of justification, with the mandated requirement of pursuing sanctification and glorification. There is a great celebration in heaven for the condemned but now justified “Born Again” adopted child of God who is now included in the Family of God as a Believer. (3)
(1) It has been solemnly and earnestly said in a certain place, What is man that You are mindful of him, or the son of man that You graciously and helpfully care for and visit and look after him? (Hebrews 2:6) AMP
(1a) Therefore, since we are now justified (acquitted, made righteous, and brought into right relationship with God) by Christ’s blood, how much more [certain is it that] we shall be saved by Him from the indignation and wrath of God. (Romans 5:9) AMP
(2) And when He {God the Holy Spirit} has come, He will convict the world of sin, and of righteousness, and of judgment: (John 16:8) NKJV
(3) But as many as received Him, to them He gave the right to become children of God, to those who believe in His name: (John 1:12) NKJV