In “The MYSTERY of the KINGDOMS REVEALED – PART I,” we determined that the Kingdom of God is a spiritual supernatural Kingdom that was first revealed as “Eden the Garden of God” located in the third heaven. God – the Father, the Son, and the Holy Spirit – plus God’s holy angels were residing in It. 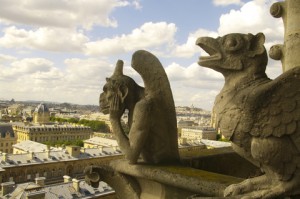 © this was the time that Satan received God’s permission to pursue his concept for forming his own “kingdoms of the world” on planet earth.

A magnificent and very intelligent angel – Lucifer/Satan – resided in the third heaven with God until sin was found in him. Then God throw him and a third of his “followers” out of heaven to the earth. Apparently, this was the time that Satan received God’s permission to pursue his concept for forming his own “kingdom(s) of the world” on the planet earth. It is imperative that we Christians know and understand that Satan cannot do anything without God’s expressed permission! God cannot allow him to run wild! God MUST continuously exert His Sovereignty and Providence over him and his demonic hoards!
Job 1:6-12 Now there was a day when the sons (the angels) of God came to present themselves before the Lord, and Satan (the adversary and accuser) also came among them. [Rev 12:10.] 7And the Lord said to Satan, From where did you come? Then Satan answered the Lord, From {among my “kingdom(s) of the world”} going to and fro on the earth and from walking up and down on it.
8And the Lord said to Satan, Have you considered My servant Job, that there is none like him on the earth, a blameless and upright man, one who [reverently] fears God and abstains from and shuns evil [because it is wrong]? 9Then Satan answered the Lord, Does Job [reverently] fear God for nothing? 10 Have You not put a hedge about him and his house and all that he has, on every side? {Everyone has a “guardian angel” appointed by God – Hebrews 1:14.} You have conferred prosperity and happiness upon him in the work of his hands, and his possessions have increased in the land. 11 But put forth Your hand now and touch all that he has, and he will curse You to Your face.
12And the Lord said to Satan (the adversary and the accuser), Behold, all that he has is in your power, only upon the man himself put not forth your hand. {God not only gave him permission to strike Job but also set conditions on how far he could go.} So Satan went forth from the presence of the Lord. AMP
Job 2:6 And the Lord said to Satan, “Behold, he {Job} is in your hand, only spare his life.” AMP

I believe God created the earth much later after the heavens, their stars, and His angels as evidenced by the angels witnessing the laying of the foundation of the earth much later than they were created.
Job 38:4-7 {God speaking to Job} Where were you when I laid the foundation of the earth? Declare to Me, if you have and know understanding. 5Who determined the measures of the earth, if you know? Or who stretched the measuring line upon it? 6Upon what were the foundations of it fastened, or who laid its cornerstone, 7 When the morning stars sang together and all the sons of God {angels} shouted for joy? AMP {Why were they so excited about this tiny planet earth?}

God rated His overall creation as “very good.” But there was something very different about the earth – it was going to be inhabited with living creatures including a creature that possibly could think and reason like the angels. This caused great jubilation among God’s angels! How could they discern this?
For my thoughts on how the Angels of God in the third heaven knew about God’s plans for earth’s inhabitants, Google www.mysteryworldview.com . Click on it. This brings up my Home Page. Click on the “Bible Study” icon in top row. Then click on #1 “REVEALING the MYSTERY of DETERMINING GOD’S FOREKNOWN and PREDESTINED PLANS for HIS CREATION.” Click on [show] in the TOC box. Scroll to PART 1, continue down to and click on “WHAT DID the NAMES of the CREATED STARS REVEAL?”

God created man as the last part of His creation here on earth, and introduced Adam and Eve to the Serpent – the devil – Satan in the “Garden of Eden” which God later “planted” on the earth AFTER His “very good” creation.
But there was something RADICALLY different about this “Garden” than the rest of God’s creation. For more information on the “Garden,” Google and click on www.MYSTERYWORLDVIEW.com This brings up my Home Page. Go to the right side to “Please Select A Book.” Click on #5 “The MYSTERY of the KINGDOMS REVEALED – PART I.” Click on CHAPTER 2.
“The MYSTERY of the KINGDOMS REVEALED – PART I” shared with us that “Eden the Garden of God” and the “Garden of Eden” are one and the same and represent the Kingdom of God whether in spiritual supernatural form in the third heaven or in a physical form here on earth. I believe that Jesus Christ is the exact representation/personification of the Kingdom of God, and wherever He is, It is with Him. That means as a truly “Born Again” child of God, the Godhead lives in you thus the Kingdom of God is in each of us individually and then corporately as members of Christ’s Bride Church as we will learn in CHAPTER 1.