Sin has now been established on the planet earth with its main players – God and His angels, Satan and his demonic angels, and lowly man. Let’s continue on with the next generation of Cain and Abel to watch God’s continued unveiling and the evolving, if you will, into the time and place in history of His eternal spiritual supernatural Kingdom of God within the soon to be developed demonically inspired and formed humanistic secular physical “kingdoms(s) of the world.”

There are some events and personal confrontations in Genesis 4:2-16 that we must put into their PROPER PERSPECTIVE. I cannot stress this enough! God the Son/ Jesus Christ is the very embodiment/personification of the eternal {without beginning or end} God and must be recognized as such. 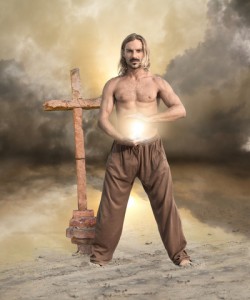 © the Light-being, the out-raying or radiance of the divine…

Hebrews 1:3 He {God the Son/Jesus Christ} is the sole expression of the glory of God [the Light-being, the out-raying or radiance of the divine], and He is the perfect imprint and very image of [God’s] nature, upholding and maintaining and guiding and propelling the universe by His mighty word of power. When He had by offering Himself accomplished our cleansing of sins and riddance of guilt, He sat down at the right hand of the divine Majesty on high {His Father on His Throne in the third heaven}, AMP
Philippians 2:6 {Jesus Christ} Who, although being essentially one with God and in the form of God [possessing the fullness of the attributes which make God God], did not think this equality with God was a thing to be eagerly grasped or retained {No need for Him to desire what He already had!}, AMP

Wherever God the Son/Jesus Christ is, the spiritual supernatural Kingdom of God is with Him whether in the third heaven as “Eden the garden of God” or on the earth as the “Garden of Eden” or individually within His Saints or corporately within Christ’s Bride Church.
Luke 11:20 {Jesus talking} But if I am casting out demons because of power from God, it proves that the Kingdom of God has arrived. TLB
Luke 17:21 {Jesus talking} Nor will people say, Look! Here [it is]! or, See, [it is] there! For behold, the kingdom of God is within you [{individually} in your hearts] and among you [surrounding you] {corporately as Christ’s Bride Church}. AMP

FIRST as we have seen in a previous chapter, Adam and Eve were removed from the Garden of Eden and placed back in the Land of Nod/wandering. In order to do this, I am going to discuss Genesis chapter 4 in detail. We have in: Genesis 4:1 Adam lay with his wife Eve {had intercourse}, and she became pregnant and gave birth to Cain {her firstborn}. She said, “With the help of the Lord I have brought forth a man.”

How Eve KNOW that God was involved in the procreation process with her? How come we Christians with all of our humanistic secular knowledge do NOT understand God’s Providence and Divine intervention in the process of human procreation?
For information on human procreation, Google www.mysteryworldview.net click on MYSTERYWORLDVIEW. This brings up “HOME.” Click on the Bible Study icon. Continue on down to #2 and click on “The MYSTERY of the INTRICACY and INTIMACY of GOD’S INVOLVEMENT in YOUR PHYSICAL LIFE REVEALED.” Click on “show” in the TOC box, then click on PART II.

Genesis 4:2, Later she gave birth to his brother Abel. Now Abel kept flocks {raised living animals – sheep and/or goats}, and Cain worked the soil {raised crops – fruits and vegetables. Eve conceived both Cain and Abel in the Land of Nod.}

3 In the course of time Cain brought some of the fruits of the soil as an offering to the Lord {Who was where?}. 4a But Abel brought fat portions from some of the firstborn of his flock.

In Genesis 4:3-4a, we have both Cain and Abel bringing their offerings before the Lord {God the Son/Jesus Christ}. To me this means that Cain and Abel had to travel from the Land of Nod where they were born and where they did their farming to the Garden of Eden – the physical presence of the “Kingdom of God” on earth in order to present their offerings to God the Son/Jesus Christ.

Now this is where we must seek the spiritually sound mind of Christ in order to understand the following scenario. As we study Cain and Abel, we must believe that both Cain and Abel’s natural physical parents were Adam and Eve. Abel’s mind-set and actions somehow showed that he knew there was a “God” which made him righteous. Even though Cain had an intimate relationship with Christ in the Garden, his mind-set, spiritual heart, and actions demonstrated that he wanted no part of God and the things of God. Cain was being molded to the mind-set of Satan which would make him demonically possessed and controlled from his beginning thus making him eternally wicked and evil – an unrepented sinner!
Hebrews 11:4 [Prompted, actuated] by faith Abel brought God a better and more acceptable sacrifice than Cain, because of which it was testified of him that he was righteous [that he {Abel} was upright and in right standing with God], and God bore witness by accepting and acknowledging his gifts. And though he died, yet [through the incident] he is still speaking. [Gen 4:3-10.] AMP
1 John 3:12 [And] not be like Cain who [took his nature and got his motivation {mind-set}] from the evil one {Satan} and slew his brother. And why did he slay him? Because his {Cain’s} deeds (activities, works) were wicked and malicious {sinful} and his brother’s {Abel’s} were righteous (virtuous) {making him redeemed}. AMP

This was Cain’s FIRST unrepented sin – his having a mind-set of believing that he could offer an unacceptable sacrifice to God. Genesis 4:5b So Cain was very angry {Cain’s SECOND unrepented sin of having GREAT anger/rage against God for NOT accepting his offering!}, and his face was downcast.

Why did Jesus look with favor on Abel’s offering but NOT on Cain’s? Because Abel’s sacrifice involved the killing of an animal thus shedding its blood. We MUST remember that the ONLY thing of value that Adam and Eve {and you and I have is} had to share with others was their testimony of God working in their {/our} life. They should have shared their testimony of God’s clothing them with animal skins which would have conveyed to the mind-set of BOTH Cain and Abel the importance in their lives of the shedding of blood for the remission of Adam and Eve’s sins. They were NOT stupid people!!!
Hebrews 9:22 [In fact] under the Law almost everything is purified by means of blood, and without the shedding of blood there is neither release from sin and its guilt nor the remission of the due and merited punishment for sins. AMP

6 Then the Lord said to Cain, “Why are you angry? Why is your face downcast? 7 If you do what is right, will you not be accepted? But if you do not do what is right, sin is crouching at your door; it desires to have you, but you must master it.”

We now have Jesus revealing Satan’s influence – his very character, mind-set, and spiritual heart – on Cain. Jesus tells us in the New Testament that Satan was a “murderer” AND a “liar” {BOTH of which Cain will display very shortly} from the beginning. The character of a murderer is among other things initially having great anger, animosity, hatred, and rage to do violence. God is opening the door of His Grace to Cain through repentance versus the consequences he faces if he does NOT repent and master sin as God commanded in verse 7.
Ephesians 4:31 Let all bitterness and indignation{/outrage} and wrath (passion, rage, bad temper) and resentment (anger, animosity) and quarreling (brawling, clamor, contention) and slander (evil-speaking, abusive or blasphemous language) be banished from you, with all malice (spite, ill will, or baseness of any kind). AMP {Jesus commands us to replace these thoughts and emotions with His LOVE for one another: that you love one another [just] as I have loved you. (John 15:12) AMP}

I have inserted the word “murdered” in the place of killing because Cain had “premeditated thoughts” about taking Abel out into the field in the Garden of Eden to murder him! Cain’s THIRD unrepented sin was the murdering [Strong’s O.T. #2026] of his brother! This act requires premeditated hateful and vengeful thoughts which turn into actions of rage and violence that results in the death of self or others. This mind-set and spiritual heart shows who holds sway over one’s life.
John 8:44 You {Cain} are of your father, the devil, and it is your will to practice the lusts and gratify the desires [which are characteristic] of your father. He was a murderer from the beginning and does not stand in the truth, because there is no truth in him. When he speaks a falsehood, he speaks what is natural to him, for he is a liar [himself] and the father of lies and of all that is false. AMP
1 John 3:15 Everyone who hates his brother is a murderer; and you know that no murderer has eternal life abiding in him. NASU

YES, WE ARE OUR BROTHER’S KEEPER!!! Cain’s FOURTH and FIFTH unrepented sins! Cain’s FOURTH unrepented sin was his lying about NOT knowing where his brother was. His murdering and lying reveals “who” was influencing his life. The “god of this world {Satan}” had MORE influence on Cain’s life than the true, living loving God Who in His Grace was trying to “save” him as we shall continue to see. His FIFTH unrepented sin was NOT accepting his responsibility for loving and caring for his brother/others.
2 Corinthians 4:4 For the god of this world has blinded the unbelievers’ minds [that they should not discern the truth], preventing them from seeing the illuminating light of the Gospel of the glory of Christ (the Messiah), Who is the Image and Likeness of God. AMP
Jeremiah 10:10 But the Lord is the true God and the God of truth (the God Who is Truth). He is the living God and the everlasting King. At His wrath the earth quakes, and the nations are not able to bear His indignation. AMP
1 John 4:8 The one who does not love does not know God, for God is love. NASU
1 John 4:7 Beloved, let us love one another, for love is (springs) from God; and he who loves [his fellowmen] is begotten (born) of God and is coming [progressively] to know and understand God [to perceive and recognize and get a better and clearer knowledge of Him]. AMP
Matthew 22:37-39 And He {Jesus Christ} replied to him, You shall love the Lord your God with all your heart and with all your soul and with all your mind (intellect). [Deut 6:5.] 38 This is the great (most important, principal) and first commandment. 39 And a second is like it: You shall love your neighbor as [you do] yourself. [Lev 19:18.] AMP

10 The Lord said, “What have you done? Listen! Your brother’s blood cries out to me from the ground.
Hebrews 11:4 [Prompted, actuated] by faith Abel brought God a better and more acceptable sacrifice than Cain, because of which it was testified of him that he was righteous [that he was upright and in right standing with God], and God bore witness by accepting and acknowledging his gifts. And though he died, yet [through the incident] he is still speaking {having obtained and sharing a “good testimony for God”}. [Gen 4:3-10.] AMP