CHAPTER 6 – The MYSTERY of HOW the “kingdom(s) of the world” CAME INTO BEING REVEALED. – Profane Mystery Worldview Revealed
»
«

Have you ever thought about how these “kingdoms/nations of the world” came into being? Previously, I have believed that only God has the “omnipotence” {/power and authority} to create these things, but as I have stated earlier, there are NO Scriptures that state that God created or brought into being the “kingdom(s) of the world” except for Israel! Many questions can be asked about the “kingdom(s) of the world.” How and why do we have kingdoms/nations? How many nations, kingdoms, and tribes have existed in history? How did they come and go? They have certainly caused a lot of chaos and turmoil – war and death in the world! Think about this! God is a “God of Love” {1 John 4:8} but in the Old Testament, He is seen as a “God of death” not only for some of the Jews – His chosen People {He always reserved a physical remnant for Himself} but also for the kingdoms and nations that sought to destroy them!

As a resident on the planet earth, do you have any idea how many nations, kingdoms, and/or tribes of people there are on the earth at this time? Google tells us that there are about 195 nations. It tells us there are some 27 kingdoms, and there are an unknown thousands of tribes. Many of these different tribes/peoples around the world do not believe or accept that they belong to a specific nation or kingdom but rather are a nation or kingdom unto their own.

Google also tells us the population of the world is over 7 billion people. To me, all of these statistics are so mind boggling as to “how can all of this work with some kind of cohesive unity for mankind around the world to survive?” In my worldly logic/common sense/reasoning/rational thinking, it is too big and too complex to make all of the pieces fit and work together let alone have some kind of worldwide unity and harmony for mankind’s survival and well being.

In other words, it is too complicated for my humanistic secular human mind to comprehend! But if I use the spiritually “sound mind” of Christ, I find the Bible shares with us that it is God Who has the plans and is their architect for ALL of the events of the world. Let’s see if we can understand God’s plans for the peoples of the world to have kingdoms and nations, their governments, and societies.
Jeremiah 29:11 For I know the thoughts and plans that I have for you, says the Lord, thoughts and plans for welfare and peace and not for evil, to give you hope in your final outcome. AMP
Isaiah 46:10, 11b {God is speaking} Declaring the end from the beginning, And from ancient times things which have not been done, Saying, ‘My purpose will be established, And I will accomplish all My good pleasure’;
11b Truly I have spoken; truly I will bring it to pass. I have planned it, surely I will do it. NASU
Job 23:13-14 But He {God} is unchangeable, and who can turn Him? And what He wants to do, that He does. 14 For He performs [that which He has] planned for me, and of many such matters He is mindful. AMP
Psalms 33:11 The counsel of the Lord stands forever, the thoughts of His heart through all generations. AMP
Hebrews 11:10 For he {Abraham} was [waiting expectantly and confidently] looking forward to the city which has fixed and firm foundations, whose Architect {is God the Father} and Builder is God {the Son}. AMP
Acts 17:26 From one man {Eve – Genesis 3:20} he {Christ} made every nation of men, that they should inhabit the whole earth; and he determined the times set for them and the exact places where they should live. NIV 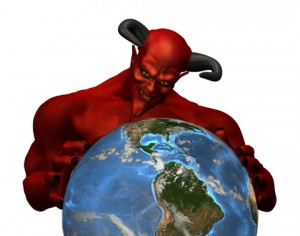 © Do you know what the scriptures say about the concept and origin of the kingdoms of the world?

Do you know what the scriptures say about the concept and origin of the “kingdom(s) of the world?” Who is its “god?” What is his sinful mind-set and heart? Why does he want to make the physical “kingdom of the world” appear to be our “god” for our “salvation?”

It is VERY important that ALL Christians MUST understand and live according to the answer to the above question! Again, there are NO scriptures that state that God originally created/brought forth the physical humanistic secular kingdoms and nations of the world EXCEPT FOR ONE NATION which I will discuss later in CHAPTERS 13 and 14. If God did NOT originally create them, how did the concept of the kingdoms and nations form and come into being?

For the answer to the above question, we will start with Satan and his sinful mind-set that led to the consequences of his sins. We do know that BEFORE Satan sinned, he was considered to be extremely beautiful in appearance, having much dignity and righteousness in his actions, having a throne in the Kingdom of God in the third heaven, being very talented musically, and very intelligent. I view the following Scriptures from Isaiah and Ezekiel to be “veiled references” as to the sins of Satan the Devil.
Isaiah 14:11-12 ‘Your pomp{/splendor/grandeur} and the music of your harps Have been brought down to Sheol; Maggots are spread out as your bed beneath you And worms are your covering.’ 12 “How you have fallen from heaven, O star of the morning, son of the dawn {Lucifer}! You have been cut down to the earth, You who have weakened the nations {as the “god” of this world}! NASU

But because of his God given gifts, Satan’s pride rose up in him and created a mind-set whereby he desired to be “as God.” His sin was detected by God Who banished him from the third heaven – Eden the Garden of God, the Kingdom of God – to the planet earth. In Isaiah 14, his five “I will’s” reveals the initial claims of his sinful mind-set and the desires of his heart to be the “god of this world” having his own “throne” in the world which means he MUST have his own “kingdom(s) of the world” to go with his throne.
Isaiah 14:13-14 And you {Lucifer} said in your {spiritual} heart, I will ascend to {third} heaven; I will exalt my throne above the stars {of the second heaven} of God; I will sit upon the mount of assembly in the uttermost north. 14 I will ascend above the heights of the clouds; I will make myself like the Most High {God}. AMP
Satan’s sinful mind-set said in his spiritual heart, “I will ascend above the stars of the second heaven and place MY THRONE in the third heaven in the Kingdom of God and make myself like God having a kingdom of my own for MY throne. I MUST have MY own ‘kingdom’!”

In his fallen state, do you think that he is smart enough, influential enough, and powerful enough to establish the “kingdom(s) of the world” on the earth? We MUST understand what took place so many many eons ago! Again, God discovered Satan’s sinful heart/nature and his sinful mind-set and cast him out of Eden the Garden of God/His Kingdom of God as a “profane/blasphemous/ irreligious/wicked thing” to the earth.
Ezekiel 28:15-17 {God said,} You {Lucifer} were blameless in your ways from the day you were created until iniquity {sin} and guilt were found in you. 16 Through the abundance of your commerce you were filled with lawlessness and violence, and you sinned; therefore I cast you out as a profane {blasphemous/ irreligious/wicked} thing from the mountain of God {Kingdom of God in the third heaven} and the guardian cherub {angel} drove you out from the midst of the stones of fire. 17 Your heart was proud and lifted up because of your beauty; you corrupted your wisdom for the sake of your splendor. I cast you to the ground {to the physical planet earth. The third heaven is a spiritual supernatural realm.}; I lay you before kings, that they might gaze at you {to determine who they will follow – you or Me}. AMP

As I stated previously, God DID NOT CREATE the KINGDOMS/NATIONS of the WORLD except for one. Watch and learn how Satan can manipulate and maneuver the mind-set of BOTH sinners and the Saints within the “Christian Church.”