Why must God reveal/make this Garden of Eden known on the earth? Does this Garden give us a glimpse back into the history of the Kingdom of God in the third heaven long BEFORE man was created? To me, the following story of Lucifer is amazingly parallel to the above story of Adam and Eve. I believe that “Eden the Garden of God” represented the spiritual supernatural “Kingdom of God” as found in the third heaven and the Garden of Eden was a physical representation on earth of the SAME spiritual supernatural Kingdom of God.
Ezekiel 28:12-13; 15-17 ….Thus says the Lord God {talking face to face to Lucifer in Eden the Garden of God}, “You {the angel Lucifer} [angels are spiritual beings] were the seal of perfection, Full of wisdom and perfect in beauty. 13 You were in Eden, the garden of God {in the Kingdom of God in the third heaven}….; 15 You were perfect in your ways from the day you were created, Till iniquity {sin} was found in you. 16 “….. You became filled with violence within, And you sinned; 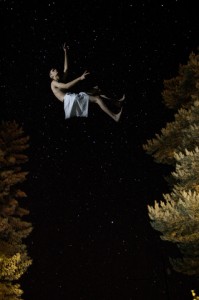 © Therefore I cast you as a profane thing out of the mountain of God.

Therefore I cast you as a profane {blasphemous, disrespectful} thing Out of the mountain of God {Kingdom of God}; 17 “…. I cast you to the ground {on the planet earth. By this action of casting Satan out of the Kingdom of God to the ground, did God give Satan the authority to bring forth the “kingdom(s) of the world” on the earth?},…. NKJV

Because of the parallel similarities of the occupants before and after they sinned, I believe they were all in the same eternal spiritual supernatural environment of the Kingdom of God. One of the similarities was that Satan sinned in Eden the Garden of God and was cast out of the third heaven to the planet earth/Land of Nod, and Adam and Eve also sinned in the Garden of Eden and had to be removed from the Garden back to the Land of Nod. To me, the Garden whether in the third heaven or on the earth is the SAME spiritual supernatural Kingdom of God and reveals that sin cannot nor will not be allowed in God’s Kingdom at any time in history.
Luke 10:18 And He {Jesus Christ} said to them, I saw Satan falling like a lightning [flash] from heaven {to the earth – Land of Nod}. AMP
Genesis 3:23 Therefore the Lord God sent him {Adam and Eve} forth from the Garden of Eden {back} to till the ground from which he was taken {in the Land of Nod}. AMP
Revelation 22:14-15 Blessed (happy and to be envied) are {are those who are righteous – } those who cleanse their garments, that they may have the authority and right to [approach] the tree of life {located in the Garden of Eden/Kingdom of God} and to enter through the gates into the city. [Gen 2:9; 3:22, 24.] 15 [But] without {outside in Hell} are the dogs and those who practice sorceries (magic arts) and impurity [the lewd, adulterers] and the murderers and idolaters and everyone {Unbelievers} who loves and deals in falsehood (untruth, error, deception, cheating). AMP

And later, God reintroduced and further revealed and confirmed the eternal spiritual supernatural Kingdom of God in Jesus Christ during His ministry here on earth some 2000 years ago? Where is Jesus Christ from?
John 18:36 Jesus answered, My {eternal spiritual supernatural} kingdom (kingship, royal power) belongs not to this world. If My kingdom were of this world, My followers would have been fighting to keep Me from being handed over to the Jews. But as it is, My kingdom is not from here (this world); [it has no such origin or source]. AMP
John 8:23 He {Jesus} said to them, You are from below; I am from above {the third heaven}. You are of this world (of this earthly order); I am not of this {kingdom(s) of the} world. AMP
Luke 17:21 {Jesus speaking} Nor will people say, Look! Here [it is]! or, See, [it is] there! For behold, the kingdom of God is within you [in your hearts] {of Born Again believers} and among you [surrounding you] {in Christ’s Bride Church}. AMP
Romans 14:17 [After all] the kingdom of God is not a matter of [getting the] food and drink [one likes], but instead it is righteousness (that state which makes a person acceptable to God) and [heart] peace and joy in the Holy Spirit. AMP

As God reveals the mystery of these kingdoms, we will see Jesus Christ and His eternal spiritual supernatural Gospel Message contained within His Kingdom as contrasted and compared to the message of the decaying humanistic secular physical kingdoms of the world through their governing agencies and their laws.
Mark 1:14-15 Now after John was arrested and put in prison, Jesus came into Galilee, preaching the good news (the Gospel) of the kingdom of God, And {Jesus} saying, The [appointed period of] time is fulfilled (completed), and the kingdom of God is at hand; repent (have a change of mind which issues in regret for past sins and in change of conduct for the better) and believe (trust in, rely on, and adhere to) the good news (the Gospel). AMP
1 Corinthians 7:31 And those {Make Believer Christians and Unbelievers} who deal with this world [overusing the enjoyments of this life] as though they were not absorbed by it and as if they had no dealings with it. For the outward form of this world (the present world order) is passing away. AMP