What have we learned in this study? We have learned that “Eden the Garden of God” which was in the third heaven was the SAME Garden as “the Garden of Eden” that God planted in the Land of Nod in His “very good” creation on the planet earth. We have learned that this “Garden” was something special above and beyond His original “very good” creation. It was a “delight.” It was “perfection.” It was a “paradise.” This Garden of Eden was the physical manifestation of the spiritual supernatural Kingdom of God in the third heaven and on the earth! And God’s Kingdom is the very embodiment{/best possible example} of God the Son/Jesus Christ. Him and His Kingdom are inseparable! This has monumental implications for His adopted children of the New Testament which we will discuss in more detail in PART II.

When God created the universe which contains the heavens, its stars, the angels, and the planets including the planet earth and its inhabitants, God viewed it and called it “Very Good.” But sin entered God’s creation when Lucifer/Satan sinned in the “Eden the Garden of God/Kingdom of God” in the third heaven, and he was cast out of there to the earth which would become his “kingdom(s) of the world.” The depravity of his mind-set and spiritual heart was set on sin which would cause wide ranging changes in God’s “very good” creation.

Alfred Wegener in 1915, believed that all of the continents of the earth were formed from one supercontinent that he called the “Urkontient.” I believe this original land mass on the earth was originally known as the “Land of Nod.” 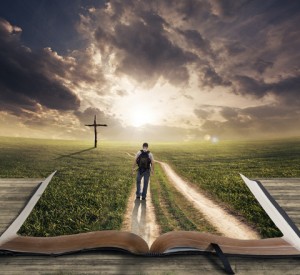 © Those God deemed righteous would be traveling their life’s path…

It was originally designated by God as the “land of wandering” meaning those God deemed righteous would be traveling their life’s path in the “kingdom(s) of the world” along the spiritual supernatural “highway to heaven” as aliens on the earth moving toward their heavenly spiritual supernatural home. I make this statement because even though God foreknew that man would sin, His heart’s desire was for all of humanity to be saved thus providing for them a “way out.”
1 Corinthians 10:13 No temptation has overtaken you but such as is common to man; and God is faithful, who will not allow you to be tempted beyond what you are able, but with the temptation will provide the way of escape also, so that you will be able to endure it. NASU

God created Adam and Eve and introduced them to Satan. Satan then seduced them to sin by disobeying God’s command of NOT eating from the tree of the knowledge of good and evil in the Garden. They were then cast out of the Garden/ Kingdom of God into the Land of Nod – the Land of Wandering. BOTH Satan and man were now together on the earth.
We now come to Cain who I believe was demonically possessed by Satan. I say this because Satan deceptively influenced his way into Cain’s life so his spiritual heart’s desire and mind-set became exactly the SAME as Satan’s spiritual heart’s desire and mind-set – to put himself above God having his own kingdom! The “kingdom(s) of the world” – the kingdoms and nations of the world except for the nation of Israel – came about through the collusion of Satan’s demonic possessing of Cain to gain his ultimate goal of becoming the “god of the ‘kingdom(s) of the world’.”

Cain’s unrepented sins took place in the Garden of Eden/Kingdom of God on earth resulting in him going back to the Land of Nod, but rather than become a wanderer as God gave him a choice to be with His protection, he choose to put down “roots of seeming permanency” and started to build a city for him, his family, and his many followers.

From Cain’s offspring came the different systems of the world – agriculture, education, and industry, and the technologies used to develop them. From the evil desires of sinful man’s hearts came the continuation and expansion of Cain’s city to eventually become the Tower of Babel in the city of Babel. Sinful man’s united evil and wicked spiritual hearts and mind-set was to build a tower reaching to the heavens to bring about the rise and implementation for the beginning of the “One World Government” with its “One World Religion.” God came down to earth to stop the building of the Tower of Babel and scattered the people with this evil and wicked mind-set over the face of the earth.

In God’s foreknown and predestined plan it was NOT time for a “One World Government” with its “One World Religion,” so God scattered sinful man over the face of the earth from which sprouted the numerous peoples with the demonically inspired “kingdom(s) of the world.” This scattering of man over the face of the earth did NOT change sinful man’s mind-set nor spiritual heart! He still did NOT trust God for His guidance in his life but rather striving to be his own god trying to achieve his own government with its own religion which continues to this day.

Next on the scene came Nimrod whom we do not know much about. When you find a commentary that includes him they depict him as a rebellious man/warrior of great ambition who stared to organize cities into a kingdom. Where upon, he became the first king in time and place in history with his kingdom of cities.

When Adam and Eve were placed in the Land of Nod, they were the first of the “wandering physical remnant,” then after them came Noah who was the first of the “wandering spiritual remnant” and then our spiritual forefather Abraham. Abraham is extremely important because from him came the God created nation of Israel with its people, the Jews with their land. The nation of Israel with its people and land are extremely important for the “end times” events for Christ’s Second Coming. God’s plan needs an area – the Valley of Megiddo – for the final Battle of Armageddon. And the final reason for Israel and its people to survive and be victorious in all of the battles that will come against it is because Christ needs to have the Mount of Olives to land on when He comes back to set up His millennial kingdom on earth at His Second Coming.

I also have included the testimony of King Nebuchadnezzar to show God’s grace in the Old Testament. The Bible states that anyone who calls on/acknowledges the Name of the Lord shall be saved. Do you believe that King Nebuchadnezzar was saved? There are those who believe that he was NOT saved.
Matthew 10:32 Therefore, everyone who acknowledges Me before men and confesses Me [out of a state of oneness with Me {I in them and they within Me.}], I will also acknowledge him before My Father Who is in heaven and confess [that I am abiding in] him. AMP {This is an extremely powerful and intricate statement from Jesus Christ about God’s ONENESS with Christ’s adopted children in PART II!!!}

To God be the Glory! AMEN AND AMEN!!!