In closing “The MYSTERY of the KINGDOMS REVEALED – PART II,” I whole heartedly encourage you to stay true to the teachings of the Bible! Do not waiver from them! PLEASE, stay true to God and His Word! 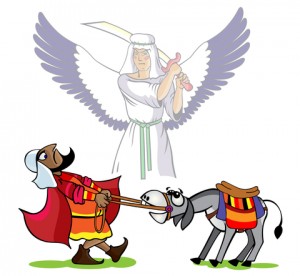 © the way of Balaam the son of Beor

2 Peter 2:15-22 “They {Christian Make Believers and Unbelievers} have forsaken the right way and gone astray, following the way of Balaam the son of Beor, who loved the wages of unrighteousness; but he was rebuked for his iniquity: a dumb donkey speaking with a man’s voice restrained the madness of the prophet. These {false teachers} are wells without water, clouds carried by a tempest, for whom is reserved the blackness of darkness forever.
Deceptions of False Teachers. “For when they speak great swelling words of emptiness, they allure through the lusts of the flesh, through lewdness, the ones who have actually escaped from those who live in error. While they promise them liberty, they themselves are slaves of corruption; for by whom a person is overcome, by him also he is brought into bondage. For if, after they have escaped the pollutions of the world through the knowledge of the Lord and Savior Jesus Christ, they are again entangled in them and overcome, the latter end is worse for them than the beginning. For it would have been better for them not to have known the way of righteousness, than having known it, to turn from the holy commandment delivered to them. But it has happened to them according to the true proverb: “A dog returns to his own vomit,” and, “a sow, having washed, to her wallowing in the mire.” NKJV
Some final thoughts in closing. There is a lot of repetition in this study. I do not know why it came this way. The Bible is written similarly. If Christ as the Word wrote something once, that should be enough! But sometimes, He writes the same thing twice in the SAME verse! A few times THREE times in the SAME verse. And there are numerous Scripture texts in the Bible where He has written the SAME spiritual principle only worded it differently. Does He have to do this because we cannot read, comprehend, and apply His principles by reading them just ONCE? The truth is, SPIRITUALLY, we are NOT too sharp! Well, at least that is the way for me! He is revealing the mystery of a principle to me and I have read these Scriptures many times when all of a sudden God the Holy Spirit turns on His light of understanding and wisdom, and “KAZAM!!!” I have learned something that I did not know, need to study more, and put into daily practice in my life. If this is also you, PLEASE PRAY for THE SOUND MIND OF CHRIST! 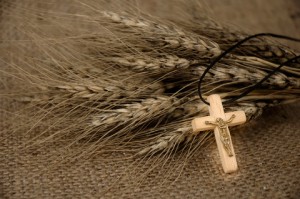 © To you it has been given to know the mysteries and secrets of the kingdom of God, but for others they are in parables…

Luke 8:10 He {Jesus} said to them {His disciples and us Christians who have the “sound mind of Christ”}, To you it has been given to [come progressively to] know (to recognize and understand more strongly and clearly) the mysteries and secrets of the kingdom of God, but for others {without the “sound mind of Christ”} they are in parables, so that, [though] looking, they may not see; and hearing, they may not comprehend. [Isa 6:9,10; Jer 5:21; Ezek 12:2.] AMP

Also, some people have commented about, “Where do we go from here?” Meaning, we are so established in the “kingdom(s) of the world” and its programs – health insurance, Social Security, Medicare, many other kinds of insurance, banking, savings and retirement accounts, taxes, separation of church and state, all of the Federal and State laws and regulations, etc., how do we establish the Kingdom of God into our daily lives? This is an extremely important and interesting question!

We do know what Jesus said about paying taxes to the government and to God what is God’s. These taxes provide certain benefits to the citizens of that nation. As a Christian, I am paying or have paid for those benefits. How do I live in the “kingdom(s) of the world” as a citizen of the Kingdom of God and still receive these benefits? Or do I receive them at all?
Matthew 22:15-22 Then the Pharisees went and consulted and plotted together how they might entangle Jesus in His talk. 16And they sent their disciples to Him along with the Herodians, saying, Teacher, we know that You are sincere and what You profess to be and that You teach the way of God truthfully, regardless of consequences and being afraid of no man; for You are impartial and do not regard either the person or the position of anyone. 17Tell us then what You think about this: Is it lawful to pay tribute [levied on individuals and to be paid yearly] to Caesar or not?
18But Jesus, aware of their malicious plot, asked, Why do you put Me to the test and try to entrap Me, you pretenders (hypocrites)?
19Show me the money used for the tribute. And they brought Him a denarius. 20And Jesus said to them, Whose likeness and title are these? 21They said, Caesar’s. Then He said to them, Pay therefore to Caesar the things that are due to Caesar, and pay to God the things that are due to God. 22When they heard it they were amazed and marveled; and they left Him and departed. AMP

We also know what the Bible says about us Christians obeying those in leadership of our governments.
Romans 13:1-5 LET EVERY person be loyally subject to the governing (civil) authorities. For there is no authority except from God [by His permission, His sanction], and those that exist do so by God’s appointment. [Prov 8:15.] 2 Therefore he who resists and sets himself up against the authorities resists what God has appointed and arranged [in divine order]. And those who resist will bring down judgment upon themselves [receiving the penalty due them]. 3For civil authorities are not a terror to [people of] good conduct, but to [those of] bad behavior. Would you have no dread of him who is in authority? Then do what is right and you will receive his approval and commendation. 4For he is God’s servant for your good. But if you do wrong, [you should dread him and] be afraid, for he does not bear and wear the sword for nothing. He is God’s servant to execute His wrath (punishment, vengeance) on the wrongdoer. 5 Therefore one must be subject, not only to avoid God’s wrath and escape punishment, but also as a matter of principle and for the sake of conscience. AMP

As I was looking through some Christian commentaries on the Matthew 22 passage, I came across the following with which I agree to the way the Christians are to respond to the “Laws of the Nations” and to their laws which violate God’s Law.
Matthew 22:21 They say unto him, Caesar’s. Then saith he unto them, Render therefore unto Caesar the things which are Caesar’s; and unto God the things that are God’s.
[They say unto him, Caesar’s.] The image was the head of the emperor; the superscription, his titles. Julius Caesar was the first who caused his image to be struck on the Roman coin. Tiberius was emperor at this time.
[Render therefore unto Caesar] The conclusion is drawn from their own premises. You acknowledge this to be Caesar’s coin; this coin is current in your land; the currency of this coin shows the country to be under the Roman government; and your acknowledgment that it is Caesar’s proves you have submitted. Don’t therefore be unjust; but render to Caesar the things which you acknowledge to be his; at the same time, be not impious {irreligious}, but render unto God the things which belong to God.
This answer is full of consummate {excellent} wisdom. It establishes the limits, regulates the rights, and distinguishes the jurisdiction of the two empires of heaven {Kingdom of God} and earth {“kingdom(s) of the world}. The image of princes stamped on their coin denotes that temporal things belong all to their government. The image of God stamped on the soul denotes that all its faculties and powers belong to the Most High, and should be employed in his service {for His Kingdom}.
But while the earth is agitated and distracted with the question of political rights and wrongs, the reader will naturally ask, What does a man owe to Caesar? – to the civil government under which he lives? Our Lord has answered the question-That which IS Caesar’s. But what is it that is Caesar’s?
Honour – The civil government under which a man lives, and by which he is protected, demands his honour and reverence..
Obedience – The laws which are made for the suppression of evil doers, and the maintenance of good order, which are calculated to promote the benefit of the whole, and the comfort of the individual should be religiously obeyed.
Tribute – The government that charges itself with the support and defense of the whole, should have its unavoidable expenses, however great, repaid by the people, in whose behalf they are incurred; therefore we should pay tribute.

But remember, if Caesar should intrude into the things of God, coin a new creed, or broach a new Gospel, and affect to rule the conscience, while he rules the state, in these things Caesar is not to be obeyed; he is taking the things of God, and he must not get them. Give not therefore God’s things to Caesar, and give not Caesar’s things to God. That which belongs to the commonwealth should, on no account whatever, be devoted to religious uses; and let no man think he has pleased God, by giving that to charitable or sacred uses which he has purloined {pilfered through State and Federal programs} from the state {This brings into play the “separation of church and state.”}. The tribute of half a shekel, which the law (Ex 30:13-14), required every person above twenty years of age to pay to the temple, was, after the destruction of the temple, in the time of Vespasian, paid into the emperor’s exchequer. This sum, Melancthon supposes, amounted annually to THREE TONS OF GOLD.
(from Adam Clarke’s Commentary, Electronic Database. Copyright © 1996, 2003, 2005, 2006 by Biblesoft, Inc. All rights reserved.)