CHAPTER 16 – KING NEBUCHADNEZZAR’S “CONVERSION” from the “kingdom(s) of the world” to the KINGDOM of GOD. – Profane Mystery Worldview Revealed
»
«

In closing PART I, we must look at an Old Testament example that provides an excellent illustration of the humanistic secular mind-set and spiritual heart of a proud and powerful king, and God’s ability and capacity in His Sovereignty and Providence to cause testing, trials, circumstances, tribulations, etc. to actually manipulate and change the thinking and actions of such a powerful man. I do NOT believe this is just a “story!” Knowing God as I do, I believe that he can do anything He wants, at any time He wants, and to anyone He wants!
Mark 10:27 Jesus looked at them and said, “With man this is impossible, but not with God; all things are possible with God.” NIV 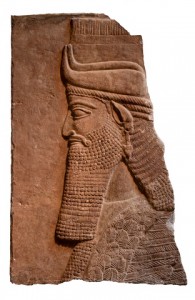 © While the words were still in the king’s mouth, there fell a voice from heaven, saying…

Watch as you read through the Scripture text how the mind-set and spiritual heart of King Nebuchadnezzar turns from the humanistic secular physical “kingdom(s) of the world” to the spiritual heart-set and spiritual heart of the eternal spiritual supernatural “Kingdom of God” and to the Sovereignty and Providence of God over these matters.
Daniel 4:28-37 All this was fulfilled and came upon King Nebuchadnezzar. 29 At the end of twelve months he was walking in the royal palace of Babylon. 30 The king said, Is not this the great Babylon that I have built as the royal residence and seat of government by the might of my power and for the honor and glory of my majesty?
31 While the words were still in the king’s mouth, there fell a voice from heaven, saying {God speaking in judgment}, O King Nebuchadnezzar, to you it is spoken: The kingdom {of the world} has departed from you, 32 And you shall be driven from among men and your dwelling will be with the living creatures of the field. You will be made to eat grass like the oxen, and seven times [or years] shall pass over you until you have learned and know that the Most High [God] rules in the kingdom of men and gives it to whomever He will.
Jeremiah 27:5 I have made the earth, the men, and the beasts that are upon the face of the earth by My great power and by My outstretched arm, and I give it {the kingdoms/nations} to whomever it seems right and suitable to Me. AMP
33 That very hour the thing was [in process of] being fulfilled upon Nebuchadnezzar. He was driven from among men and did eat grass like oxen [as Daniel had said he would], and his body was wet with the dew of the heavens until his hair grew like eagles’ [feathers] and his nails [were] like birds’ [claws]. 34 And at the end of the days [seven years], I, Nebuchadnezzar, lifted up my eyes to heaven, and my understanding and the right use of my mind returned to me; and I blessed the Most High [God] and I praised and honored and glorified Him Who lives forever, Whose dominion is an everlasting dominion; and His kingdom endures from generation to generation.
35 And all the inhabitants of the earth are accounted as nothing. And He does according to His will in the host of heaven and among the inhabitants of the earth, and none can stay His hand or say to Him, What are You doing?
36 Now at the same time my reason and understanding returned to me; and for the glory of my kingdom, my majesty and splendor returned to me, and my counselors and my lords sought me out; I was reestablished in my kingdom, and still more greatness [than before] was added to me. {God BLESSED King Nebuchadnezzar just as He did Job when he returned to his God given sanity.}
Job 42:10 And the Lord turned the captivity of Job and restored his fortunes, when he prayed for his friends; also the Lord gave Job twice as much as he had before. [Deut 30:1-3; Ps 126:1, 2.] AMP
37 Now I, Nebuchadnezzar, praise and extol and honor the King of heaven, Whose works are all faithful and right and Whose ways are just. And those who walk in pride He is able to abase and humble. AMP

There are no Scriptures that share with us that God recognized King Nebuchadnezzar as “righteous” by his confession of faith in God, but I believe that he will stand with those of us who are righteous when the time comes.
Galatians 3:8-9 And the Scripture, foreseeing that God would justify the Gentiles by faith {King Nebuchadnezzar was a Gentile!}, preached the gospel to Abraham beforehand, saying, “In you all the nations {Kingdom of King Nebuchadnezzar included} shall be blessed.” 9 So then those who are of faith are blessed with believing Abraham. NKJV
Malachi 3:6 For I am the Lord, I do not change; that is why you, O sons of Jacob, are not consumed. AMP
Joel 2:32 And whoever shall call on the name of the Lord shall be delivered and saved, for in Mount Zion and in Jerusalem there shall be those who escape, as the Lord has said, and among the remnant [of survivors] shall be those whom the Lord calls. [Acts 2:17-21; Rom 10:13.] AMP

I believe that King Nebuchadnezzar acknowledged God for Who and What He is!
Matthew 10:32 Therefore, everyone who acknowledges Me before men and confesses Me [out of a state of oneness with Me], I will also acknowledge him before My Father Who is in heaven and confess [that I am abiding in] him. AMP