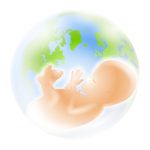 Just how does God work in the procreation process of humans down through the successive generations? Carefully study the following material. Not everyone wants YOU to know these truths! In fact, they are hard to find! Most people trained in the medical field know about these things, but they are not bringing forth the truth because it would reveal God as being real and involved with His creation! Satan has deceived man into believing Darwin’s “theory of evolution” to be the truth! The theory of evolution proposed by Charles Darwin entails the evolution by natural selection of all life on earth. It states that new generations evolve with different inheritable traits, and that the traits that are superior for survival will be passed on to new generations {known as “survival of the fittest”}. This means that given enough time, an organism can change and evolve to create a new species. NOTHING could be further from the truth!!! While species within themselves can change somewhat over time, they do NOT in and of themselves create “new species! This is God’s work in creation as found in the Book of Genesis Chapter One.

My wife’s cousin’s husband {now deceased} was a gynecologist. After I understood this process, I asked him if what I knew was correct. He said it was. I asked him why it was so hard to obtain these simple facts. He said real quietly, “They do not want you to know.” “Who does not want us to know what?” I asked. He did not answer. Let’s take a look a human reproduction and you can make up your own mind! Was/is God involved in YOUR being here at this time in history?

Human Reproduction Specialists guesstimate that each human male is capable of producing at least ½ trillion to one trillion (1,000,000,000,000) plus sperm in his reproductive lifetime. The Encyclopedia Britannica gives us some insights as to the number of sperm in each man’s one ejaculate, “Only one sperm fertilizes each egg, even though about 200-300,000,000 sperm are contained in an average ejaculation. Each human egg {which is the largest cell in the female human body} and each human sperm {which is the smallest cell in the male human body} produced has slightly different genetic information carried in the chromosomes; this accounts for the differences and similarities between children of the same parents.”

The Encyclopedia Britannica further states that each human female contains “Hollow balls of cells—follicles—containing immature egg cells which are present in her ovaries at birth; there are usually 150,000 to 500,000 follicles or more at this time. When the female reaches adolescence and young adulthood, the number has been reduced to only about 34,000. During the active child-bearing years, normally between the ages 13 and 50, only 300 to 400 of the follicles undergo maturation.”

***{I researched the above stats several years ago when you could go online and Google “Encyclopedia Britannica – human sperm and human ovary,” and it would give you the above information. Britannica ceased printing hard copies of their Encyclopedia in 2012, and now you have to go online, register, have a “password,” and have to pay to get this information.}

THINK ABOUT THIS!!! To put this into perspective – the male and female human reproductive systems are diametrically opposed in their physiological make up and operation. Your father continuously produces up to1 trillion plus sperm during his 60 plus reproductive years. His sperm can be stored in his body for some time and then reabsorbed unless ejaculated. Each ejaculate contains some 200-300 million sperm. Your father’s sperm and only your father’s sperm contains the DNA that produced you and continues in your genealogy. He also determines the sex of each of his offspring.

Your mother was born with all of her eggs stored in her ovaries. THIS IS VERY IMPORTANT! WHY? Scientists have been desperately trying to prove that the human female produces additional eggs after her birth, but they have been unsuccessful. As it stands, this means these 300-400 eggs that will reach maturation and were stored in her ovaries at birth were actually formed in her at her conception. This begs some really interesting questions!!! Was God the Holy Spirit actually present at her conception? Did He place in her eggs at that time the DNA for her family genealogy? Did God’s plans written in His Book of Life foreknow and predestine the joined together DNA from your mother’s one egg and your father’s one sperm that produced you with your DNA to continue your family tree/genealogy and the human race? Does God participate in the natural procreation process? YES, YES, YES, and YES!!!

Psalms 139:13 You {God the Holy Spirit} made all the delicate, inner parts of my body and knit them together in my mother’s womb. TLB

Ecclesiastes 11:5 God’s ways are as mysterious as the pathway of the wind {God the Holy Spirit – John 3:8} and as the manner in which a human spirit is infused into the little body of a baby while it is yet in its mother’s womb. TLB

Zechariah 12:1 THE BURDEN or oracle (the thing to be lifted up) of the word of the Lord concerning Israel: Thus says the Lord, Who stretches out the heavens and lays the foundation of the earth and forms the spirit of man within him {at his conception – Ecclesiastes 11:5}: AMP

You are a unique, one of a kind individual. Through the God ordained process of natural human procreation and only through His involvement in this natural coitus process, no other naturally conceived person in history of the entire world was, is, or ever will be an exact replica or duplicate of you. This is easily proven through physical identification. No other naturally conceived person in the world has identical mitochondrial DNA, an identical set of palm and fingerprints, an identical set of footprints, or an identical retina pattern as yours nor will any other person have your spirit! YOU are YOU and ONLY YOU are YOU!!! Again, how did David know so much about human reproduction?

Psalms 139:13-14 You made all the delicate, inner parts of my body and knit them together in my mother’s womb. 14 Thank you for making me so wonderfully complex! It is amazing to think about. Your workmanship is marvelous-and how well I know it. TLB

As previously stated, God’s foreknown and predestined plans for your life found in His Book of Life also includes your salvation and your ministry.

1 Timothy 2:3-4 For such [praying] is good and right, and [it is] pleasing and acceptable to God our Savior, 4 Who wishes all men to be saved and [increasingly] to perceive and recognize and discern and know precisely and correctly the [divine] Truth. AMP

Ephesians 1:4 Even as [in His love] He {God the Father} chose us [actually picked us out for Himself as His own] in Christ before the foundation of the world, that we should be holy (consecrated and set apart for Him) and blameless in His sight, even above reproach, before Him in love {“Born Again”}. AMP