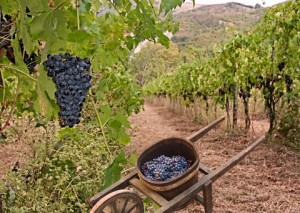 © Parable of the Workers in the Vinyard.

Let’s interpolate Jesus’ “Parable of the Workers in the Vineyard” to illustrate to us the correct way of viewing, discerning, and executing the spiritual supernatural message of salvation contained in all of His parables about the kingdom of God/heaven that is present on earth at this time and of Christ’s judgment of what is yet to come. In this parable, Jesus Christ again clearly illustrates the magnificent gift of God’s Grace towards all repentant sinners. “For God shows no partiality [undue favor or unfairness; with Him one man is not different from another].”  [Deuteronomy 10:17; 2 Chronicles 19:7.] (Romans 2:11) AMP This parable illustrates the spiritual processes of justification, sanctification, eternal glorification, and eternal condemnation.

The Parable of the Workers in the Vineyard:

“For the kingdom of heaven is like a landowner who went out early in the morning to hire laborers for his vineyard.  Now when he had agreed with the laborers for a denarius a day, he sent them into his vineyard. And he went out about the third hour and saw others standing idle in the marketplace, and said to them, ‘You also go into the vineyard, and whatever is right I will give you.’ So they went. Again he went out about the sixth and the ninth hour, and did likewise.  And about the eleventh hour he went out and found others standing idle, and said to them, ‘Why have you been standing here idle all day?’ They said to him, ‘Because no one hired us.’ He said to them, ‘You also go into the vineyard, and whatever is right you will receive.’
“So when evening had come, the owner of the vineyard said to his steward, ‘Call the laborers and give them their wages, beginning with the last to the first.’ (1) And when those came who were hired about the eleventh hour, they each received a denarius. But when the first came, they supposed that they would receive more; and they likewise received each a denarius. And when they had received it, they complained against the landowner, saying, ‘These last men have worked only one hour, and you made them equal to us who have borne the burden and the heat of the day.’ But he answered one of them and said, ‘Friend, I am doing you no wrong. Did you not agree with me for a denarius? Take what is yours and go your way. I wish to give to this last man the same as to you. Is it not lawful for me to do what I wish with my own things? Or is your eye evil because I am good?’ So the last will be first, and the first last. For many are called, but few chosen.” (Matthew 20:1-16) NKJV
(1) And behold, there are some [now] last who will be first [then], and there are some [now] first who will be last [then]. (Luke 13:30) AMP

This parable is quite easy to interpolate. It reveals the wages offered to the laborers {salvation} to work {the process of sanctification} in the vineyard {a vineyard produces grapes which are grown in a field – the world – Matthew 13:38} by the owner {Jesus Christ}. This means they should have recognized their work in the world was to win lost souls/sinner to Jesus Christ as their personal Savior {justification} (2) and continuing their work in teaching them about the process of sanctification making Jesus Christ their Lord God and Master leading them to eternal glorification. (3)
(2) For we are His workmanship, created in Christ Jesus for good works, which God prepared beforehand that we should walk in them. (Ephesians 2:10) NKJV
(3) And [what if] He thus purposes to make known and show the wealth of His glory in [dealing with] the vessels (objects{/sinners}) of His mercy which He has prepared beforehand for glory, Even including ourselves whom He has called, not only from among the Jews but also from among the Gentiles (heathen)? (Romans 9:23-24) AMP

What is interesting to me is that many of the workers who were first hired are lost souls/sinners who received salvation/justification from the owner/God of the vineyard, but they were just like the older son in the “Parable of the Prodigal Son.” They did not understand their work in the processes of justification and sanctification – winning and discipling lost souls/sinners to Jesus Christ as their personal Savior, Lord God, and Master. Therefore, they would NOT accept a new convert’s justification. They bitterly complained about it. They refused to grow up in God’s process of their sanctification. Too many Make Believers cannot accept the predestined spiritual work that God has foreordained for them in the kingdom of God/heaven here on earth.

The owner of the vineyard told His hirelings/disciples that He did NOT show any favoritism to anyone (3) and that He could pay whatever He wanted to whomever He wanted. (4)
(3) [God] is not partial to princes, nor does He regard the rich more than the poor, for they all are the work of His hands. (Job 34:19) AMP
(4) Am I {Jesus} not permitted to do what I choose with what is mine? [Or do you begrudge my being generous?] Is your eye evil because I am good?                (Matthew 20:15) AMP

Again, Jesus Christ said, “So the last will be first, and the first last. For many are called, but few chosen.” (Matthew 20:16) NKJV (5) Not everyone who says, “Lord, Lord” is going to be saved! (6)
(5) Enter through the narrow gate; for wide is the gate and spacious and broad is the way that leads away to destruction, and many are those who are entering through it. But the gate is narrow (contracted by pressure) and the way is straitened and compressed that leads away to life, and few are those who find it.  [Deuteronomy 30:19; Jeremiah 21:8.] (Matthew 7:13-14) AMP
(6) Not everyone who says to Me, Lord, Lord, will enter the kingdom of heaven, but he who does the will of My Father Who is in heaven. Many will say to Me on that day, Lord, Lord, have we not prophesied in Your name and driven out demons in Your name and done many mighty works in Your name? And then I will say to them openly (publicly), I never knew you; depart from Me, you who act wickedly [disregarding My commands].  [Ps 6:8.] (Matthew 7:21-23) AMP

The work that was predestined before time began for the Children of God is revealed to us – the winning of lost souls/sinners for Jesus Christ and the numbers that God expects each of us to produce. “But he who received seed on the good ground is he who hears the word and understands it, who indeed bears fruit and produces: some a hundredfold, some sixty, some thirty.” (Matthew 13:23) NKJV

The following parables declare the same works for God’s Children as what I have been sharing, but we now have judgment being more clearly revealed and defined for those who do not bear fruit i.e. the fruit that lasts for all of eternity in the winning of the lives of lost souls/sinners to Jesus Christ as their personal Savior thus receiving the free gift of salvation and encompassing its processes of justification, sanctification, eternal glorification, and eternal condemnation.