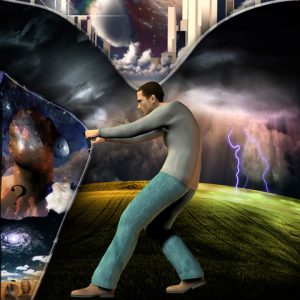 In this study on ETERNITY, I am sharing Scripture and some of my thoughts providing insights into the ETERNALITY of the spiritual supernatural God and about ETERNITY itself. They BOTH share the same concept of being without beginning and without end. I believe ETERNITY to be BOTH physical and spiritual. It was initially one immense/huge/enormous/gigantic/immeasurable/ multidimensional continuously expanding blob totally devoid of light and empty. It possibly appeared as a giant partially inflated beach ball that can change shape as it is pummeled about by the forces within it.

But God is Light and Life! His Light outshines ALL darkness including ETERNITY! God INTERMINGLES with ETERNITY revealing and using the dark secrets and contents of ETERNITY as His STOREHOUSE for His creation as He shines His Light and gives Life to it!

Scripture states that God inhabits ETERNITY, but Scripture also states that God cannot be captured nor contained. I believe that because God is Spirit, He is able to INTERMINGLE with ETERNITY the SAME way He is able to indwell His adopted children. A main difference being that He exercises total control over ETERNITY!

God’s character and possessions that were with Him from ETERNITY are Himself as the Godhead/Trinity, His thoughts and plans for creation, His Kingdom with His Throne as His place of residence in the spiritual Third Heaven/Paradise, My Father’s House, the New Jerusalem, and three Books – the Book of Scriptures, the Book of Life, and the Book of Deeds.

God has a number of spiritual characteristics/attributes some of which He shares with those who accept Jesus Christ as their personal Savior. Man will NEVER become God, but redeemed man does partake of the Divine Nature of the Almighty {DNA}.

Now comes creation. I believe at about the same time as God created the inanimate life of the heavens and their host/stars, He created the animated spiritual host/ angels. God used the Gospel Message to Name the Stars. He has an ETERNAL Gospel for Himself, an unalterable permanent Gospel Message in the stars, and prayerfully we have the SAME Message for our hard copy – Christ’s Word – the Bible. God’s hosts – the stars and the angels together – witnessed God placing the created earth in its designated foundation many eons after the initial creation of the universe.

Satan and many other of the angels sinned against God thus revealing the Gospel Message with its Savior Who was “slain from the foundation of the world/ universe.” Next man was created – male and female – with both a physical and spiritual nature. His physical nature was created first and our spiritual nature last.
Genesis 2:7 Then the Lord God formed man from the dust of the ground and breathed into his nostrils the breath or spirit of life, and man became a living being. [1 Cor 15:45-49.] AMP
Genesis 1:26-27 God said, Let Us [Father, Son, and Holy Spirit] make mankind in Our image, after Our likeness, and let them have complete authority over the fish of the sea, the birds of the air, the [tame] beasts, and over all of the earth, and over everything that creeps upon the earth. [Ps 104:30; Heb 1:2; 11:3.] 27 So God created man in His own image, in the image and likeness of God He created him; male and female He created them. [Col 3:9, 10; James 3:8, 9.] AMP
1 Corinthians 15:44-49 It is sown a natural (physical) body; it is raised a supernatural (a spiritual) body. [As surely as] there is a physical body, there is also a spiritual body. 45 Thus it is written, The first man Adam became a living being (an individual personality); the last Adam (Christ) became a life-giving Spirit [restoring the dead to life]. [Gen 2:7.] 46 But it is not the spiritual life which came first, but the physical and then the spiritual. 47 The first man [was] from out of earth, made of dust (earthly-minded); the second Man [is] the Lord from out of heaven. [Gen 2:7.] 48 Now those who are made of the dust are like him who was first made of the dust (earthly-minded); and as is [the Man] from heaven, so also [are those] who are of heaven (heavenly-minded). 49 And just as we have borne the image [of the man] of dust, so shall we and so let us also bear the image [of the Man] of heaven. AMP
The angels sinned causing them to need a Savior from the foundation of the world. A number of thousands of years ago, Adam and Eve sinned causing them and all generations of man to be sinners in need of a Savior. When a sinner accepts Jesus Christ as their personal Savior, they are returned to the original character of sinless Adam and our Savior Jesus Christ.

When a person dies, their spirit returns to God and contains ALL of the events of their life. God has a permanent and detailed record of each person’s life in their spirit.

Scripture straightway explains God’s judgment of each naturally conceived person:
John 3:18 He who believes in Him [who clings to, trusts in, relies on Him] {Jesus Christ as their personal Savior, Lord God, and Master} is not judged [he who trusts in Him never comes up for judgment; for him there is no rejection, no condemnation — he incurs no damnation] {He/she has ETERNAL life with God in His Kingdom.}; but he who does not believe (cleave to, rely on, trust in Him) is judged already [he has already been convicted and has already received his sentence] because he has not believed in and trusted in the name of the only begotten Son of God. [He is condemned for refusing to let his trust rest in Christ’s name.] {He/she is NOT saved and suffers in ETERNITY separated from God in Hell/The Lake of Fire forever!!!} AMP

Closing in His Name – AMEN and AMEN!

BOOK: 09. The MYSTERY of the ALL-INCLUSIVE RELATIONSHIP of GOD and MAN REVEALED THROUGHOUT ETERNITY

09. The MYSTERY of the ALL-INCLUSIVE RELATIONSHIP of GOD and MAN REVEALED THROUGHOUT ETERNITY