This work of soul winning in the worldwide Christian Church has suffered for centuries with the huge sins of spiritual segregation and spiritual racism. Spiritual segregation started in the Church in the first century with the claims of BOTH the Roman Catholic Church and the Orthodox Christian Church of being the FIRST and ONLY true Christian Church. Then in the 1500’s, came the advent of the Protestant Church boasting the SAME claim. This spiritual segregation has continued into “TODAY” in that “I am a Catholic,” I am Orthodox,” or “I am a Protestant” when in reality we are all CHRISTIANS through our true faith and foundation in Jesus Christ, His deity as God the Son as Creator, Savior, and Judge, and His humanity as Jesus Christ the Son of Man which includes His virgin birth, His teachings from the Bible, His shed blood and death on the cross, resurrection, and ascension which gives those who believe in His Name VICTORY over sin and death! (6)
(6) And there is salvation in and through no one else, for there is no other name under heaven given among men by and in which we must be saved. (Acts 4:12) AMP
(6a) But when this perishable will have put on the imperishable, and this mortal will have put on immortality, then will come about the saying that is written, “DEATH IS SWALLOWED UP in victory. O DEATH, WHERE IS YOUR VICTORY? O DEATH, WHERE IS YOUR STING?” The sting of death is sin, and the power of sin is the law; but thanks be to God, who gives us the victory through our Lord Jesus Christ. Therefore, my beloved brethren, be steadfast, immovable, always abounding in the work of the Lord, knowing that your toil is not in vain in the Lord.                                (1 Corinthians 15:54-58) NASU

But these simple foundational building blocks were NOT enough! False teachers have interjected all kinds of extrapolations into this spiritual segregation forming many, many, many numerous denominations in all three entities. (7)
(7) See to it that no one carries you off as spoil or makes you yourselves captive by his so-called philosophy and intellectualism and vain deceit (idle fancies and plain nonsense), following human tradition (men’s ideas of the material {world} rather than the spiritual world {Kingdom of God}), just crude notions following the rudimentary and elemental teachings of the universe {world} and disregarding [the teachings of] Christ (the Messiah). (Colossians 2:8) AMP

These false teachers with their false teachings brings spiritual racism – division – into the Christian Church. (8) It is guesstimated there are some 40,000 plus Christian denominations and the hundreds of “Christian Cults” worldwide which gives to the Christian Church an image that is diametrically opposed to what it is supposed to look like according to the Book of Acts. While a semblance of the Christian Church is visible, the UNITY that is to glorify God the Father and His Son – Jesus Christ – in their unity, and us as True Believers being in unity with them is “A JOKE” straight from Satan! (9)
(8) BUT THE [Holy] Spirit distinctly and expressly declares that in latter times some will turn away from the faith, giving attention to deluding and seducing spirits and doctrines that demons teach, Through the hypocrisy and pretensions of liars whose consciences are seared (cauterized), (1 Timothy 4:1-2) AMP
(8a) Some {false preachers and teachers} may deny these things, but they are the sound, wholesome teachings of the Lord Jesus Christ and are the foundation for a godly life. Anyone who says anything different is both proud and stupid. He is quibbling over the meaning of Christ’s words and stirring up arguments ending in jealousy and anger, which only lead to name-calling, accusations, and evil suspicions. These arguers-their minds warped by sin-don’t know how to tell the truth; to them the Good News is just a means of making money. Keep away from them.                          (1 Timothy 6:3-5) TLB
(9) That they all may be one, [just] as You, Father, are in Me and I in You, that they also may be one in Us, so that the world may believe and be convinced that You have sent Me. (John 17:21) AMP 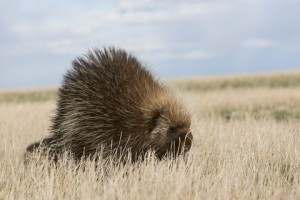 © The Christian Church reminds me of a group of porcupine scattered around the world.

The Christian Church reminds me of a group of porcupine {A large rodent whose body is completely covered with large sharply pointed quills that they can shoot towards their enemies for their defense.} scattered around the world. As they {porcupine/Christian’s} go about their normal routine, {A porcupine’s routine is survival and procreation. A Christian’s routine is work at a job, physical procreation, spiritual rebirth, and bearing fruit/winning lost sinners for Christ in the world} their quills are all laid back in “relaxed but ready mode.” The instant that a porcupine sees another porcupine/the Christian spies another Christian of another denomination/church, UP STANDS THEIR QUILLS {Bibles/swords} to the “attack mode” and the battle continues of, “If you are wrong in that Christian theology, doctrine, practice what else are you in error with? I cannot fellowship and be unequally yoked with such people!” This has been an ongoing and escalading problem from the beginning of the Church and continues to this day.

Paul gives us a glimpse of this problem within the first century Church when he writes, “We have spoken freely to you, Corinthians {put in whoever is not seeking unity within the Christian Church}, and opened wide our hearts to you. We are not withholding our affection from you, but you are withholding yours from us. As a fair exchange — I speak as to my children — open wide your hearts {to us} also. (10) (2 Corinthians 6:11-13) NIV
(10) May the God who gives endurance and encouragement give you a spirit of unity among yourselves as you follow Christ Jesus, so that with one heart and mouth you may glorify the God and Father of our Lord Jesus Christ. Accept one another, then, just as Christ accepted you, in order to bring praise to God. (Romans 15:5-7) NIV