I have included in this chapter numerous texts of Scripture that I ask you to pray about and let God the Holy Spirit help you to discern the spiritual wisdom of God and the mature spiritual application of them into your life, the life of your family, and corporately into the life of your church family. If God does not implant His thoughts to you through His Word via His Holy Spirit, where and how are you going to discern them? (1)
(1) If any of you lacks wisdom, let him ask of God, who gives to all liberally and without reproach, and it will be given to him. But let him ask in faith, with no doubting, for he who doubts is like a wave of the sea driven and tossed by the wind. For let not that man suppose that he will receive anything from the Lord; he is a double-minded man, unstable in all his ways. (James 1:5-8) NKJV
(1a) Heavenly Versus Demonic Wisdom. Who is wise and understanding among you? Let him show by good conduct that his works are done in the meekness of wisdom. But if you have bitter envy and self-seeking in your hearts, do not boast and lie against the truth. This wisdom does not descend from above, but is earthly, sensual, demonic. For where envy and self-seeking exist, confusion and every evil thing are there. But the wisdom that is from above is first pure, then peaceable, gentle, willing to yield, full of mercy and good fruits, without partiality and without hypocrisy. (James 3:13-17) NKJV 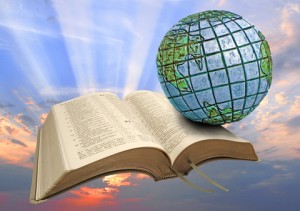 The foundational and fundamental teaching from the Bible simply states the ministry of every True Believer, “We preach Christ (the Messiah) crucified, [preaching which] to the Jews is a scandal and an offensive stumbling block [that springs a snare or trap], and to the Gentiles it is absurd and utterly unphilosophical nonsense.” (1 Corinthians 1:23) AMP

Notice the words of how the secular humanistic worldview receives the Gospel message. It is a “scandal and an offensive stumbling block, absurd and utterly unphilosophical nonsense” as revealed in the above verse. The word philosophy means a way of thinking and can be used in both profane secular humanistic worldview thinking and spiritual supernatural Kingdom of God Biblical Christian Worldview thinking. In the above verse, the gentiles were the Greeks and others who searched all the known physical mysteries of man and nature, and to them, the preaching and teaching of how a spiritual, invisible, and seemingly unknowable God became man, died on the cross for man’s sins, was buried in a grave, rose from the dead on the third day, and ascended into heaven was a scandal and an offensive stumbling block, absurd and utterly unphilosophical nonsense i.e. literally insane thinking on the part of anyone who believed such gibberish because it made no literal worldly common sense to them! It was not rational from their worldly point of view! Our Brother Paul was very good in revealing the true living loving God into this insane and unphilosophical nonsense to his listeners. Listen to his testimony. (2)
(2) for as I was passing through and considering the objects of your worship, I even found an altar with this inscription: TO THE UNKNOWN GOD.
Therefore, the One whom you worship without knowing, Him I proclaim to you: God, who made the world and everything in it, since He is Lord of heaven and earth, does not dwell in temples made with hands. Nor is He worshiped with men’s hands, as though He needed anything, since He gives to all life, breath, and all things. And He has made from one blood every nation of men to dwell on all the face of the earth, and has determined their preappointed times and the boundaries of their dwellings, so that they should seek the Lord, in the hope that they might grope for Him and find Him, though He is not far from each one of us; for in Him we live and move and have our being, as also some of your own poets have said, ‘For we are also His offspring.’ Therefore, since we are the offspring of God, we ought not to think that the Divine Nature is like gold or silver or stone, something shaped by art and man’s devising. Truly, these times of ignorance God overlooked, but now commands all men everywhere to repent, because He has appointed a day on which He will judge the world in righteousness by the Man whom He has ordained. He has given assurance of this to all by raising Him from the dead.” (Acts 17:23-31) NKJV

Remember Paul’s testifying before Agrippa, the Roman King and Festus, the Roman governor of Judea in Acts chapter 26? Paul was sharing with him the spiritual supernatural/mystical appearance of Jesus to him on the road to Damascus and, At this point Festus interrupted Paul’s defense. “You are out of your mind, Paul!” he shouted. “Your great learning is driving you insane.” (Acts 26:24) NIV Festus could not comprehend Paul’s testimony of the spiritual message of the Gospel that he was sharing with him. He, not Paul, was spiritually discerned i.e. while he could mentally think/ reason in the profane secular humanistic worldview, he did not have a clue as to spiritual supernatural reasoning/Godly thinking! He not Paul, was the one with the profane secular humanistic worldview, the one who was insane in his thinking about the world and the things of the world!

This profane secular humanistic worldview has not changed! As you present your testimony of Jesus Christ and His miracles and work in your changed life to those whom God has sent you, many will reject you, scoff at you, make fun of your faith in the true, living, and loving God and Jesus Christ – “Oh, I really feel so sorry for you. Poor thing! Why do you need a mystical crutch in your life? Well, I do not! I can stand on my own two feet – thank you!” But let that not intimidate nor stop you! (3) Continue to share Christ’s testimony in your life as God leads, live your life so that it reflects Him, always rejoicing, and never stop giving God glory, honor, praise, and thanks in your testimony. (4)
(3) Persecutions Are Coming (Mark 13:9-13; Luke 21:12-17) “Behold, I send you out as sheep in the midst of wolves. Therefore be wise as serpents and harmless as doves.  But beware of men, for they will deliver you up to councils and scourge you in their synagogues.  You will be brought before governors and kings for My sake, as a testimony to them and to the Gentiles.  But when they deliver you up, do not worry about how or what you should speak. For it will be given to you in that hour what you should speak; for it is not you who speak, but the Spirit of your Father who speaks in you. (Matthew 10:16-20) NKJV
(4) Rejoice in the Lord always. Again I will say, rejoice! Let your gentleness be known to all men. The Lord is at hand. Be anxious for nothing, but in everything by prayer and supplication, with thanksgiving, let your requests be made known to God; and the peace of God, which surpasses all understanding, will guard your hearts and minds through Christ Jesus.
Meditate on These Things. Finally, brethren, whatever things are true, whatever things are noble, whatever things are just, whatever things are pure, whatever things are lovely, whatever things are of good report, if there is any virtue and if there is anything praiseworthy — meditate on these things. (Philippians 4:4-8) NKJV

Let’s continue with several illuminating Scripture texts that will discern for you the difference between this scandal of ludicrous thinking, this mentally offensive stumbling block, this absurd and utterly unphilosophical spiritual nonsense – this same insane thinking you and I had before we were Born Again, and compare it to the Spirit led philosophical spiritual supernatural worldview – the way your mind should be set on God and the Kingdom of God – Christ’s Bride Church here on earth. Listen to what they say in your heart and mind. Let God speak to you through them! Ask Him how He would have you apply them to your physical and spiritual worldview of your life and the life of your family as He reveals His spiritual supernatural Kingdom of God Biblical Christian Worldview. Most of these texts were written by our Brother Paul who of all of Christ’s followers was the best taught and trained in Jewish Law and Roman tradition. It took God 14 years from the time of his conversion (33-34 A.D.) to transform and renew his mindset from the physical worldview to the spiritual supernatural Kingdom of God Biblical Christian Worldview to prepare him for his first missionary mission (47-48 A.D.). (5)
(5) Defending the Gospel (cf. Acts 15:1-21) Then after fourteen years I went up again to Jerusalem with Barnabas, and also took Titus with me. (Galatians 2:1) NKJV

The above text involves the traditions of men, but we need to remember what Jesus said about man’s tradition, “Thus you nullify the word of God by your tradition that you have handed down. And you do many things like that.” (Mark 7:13) NIV

TRUE BELIEVERS MUST CONFRONT the FALSE TEACHERS and THEIR FALSE TEACHINGS.

Paul shares with us how he dealt with the Make Believers within Christ’s Church and his reason for doing so. “As the truth of Christ is in me, this boasting of mine will not be stopped in the regions of Achaia. Why? Because I do not love you? God knows I do! But what I am doing I will continue to do, so that I may cut off opportunity from those who desire an opportunity to be regarded just as we are in the matter about which they are boasting. For such men are false apostles, deceitful workers, disguising themselves as apostles of Christ. No wonder, for even Satan disguises himself as an angel of light. Therefore it is not surprising if his servants also disguise themselves as servants of righteousness, whose end will be according to their deeds.” (2 Corinthians 11:10-15) NASU

In closing this chapter, I whole heartedly encourage you to stay true to the teachings of the Bible! Do not waiver from them! Stay true to God’s Word!
“They have forsaken the right way and gone astray, following the way of Balaam the son of Beor, who loved the wages of unrighteousness; but he was rebuked for his iniquity: a dumb donkey speaking with a man’s voice restrained the madness of the prophet. These are wells without water, clouds carried by a tempest, for whom is reserved the blackness of darkness forever.
Deceptions of False Teachers. “For when they speak great swelling words of emptiness, they allure through the lusts of the flesh, through lewdness, the ones who have actually escaped from those who live in error. While they promise them liberty, they themselves are slaves of corruption; for by whom a person is overcome, by him also he is brought into bondage. For if, after they have escaped the pollutions of the world through the knowledge of the Lord and Savior Jesus Christ, they are again entangled in them and overcome, the latter end is worse for them than the beginning. For it would have been better for them not to have known the way of righteousness, than having known it, to turn from the holy commandment delivered to them. But it has happened to them according to the true proverb: “A dog returns to his own vomit,” and, “a sow, having washed, to her wallowing in the mire.” (2 Peter 2:15-22) NKJV