CHAPTER 9 – GOD’S SOVEREIGNTY and PROVIDENCE in BRINGING FORTH the PHYSICAL INTERNAL WORKINGS of the FOUNDATION of the KINGDOMS and SOCIETIES of the WORLD. – Profane Mystery Worldview Revealed
»
«

Let us continue on in Genesis Chapter Four with God bringing forth from the beginning of man the generations of people that evolved and brought with them the foundations and mechanisms upon which government and human society began and would eventually explode across the face of the earth.
Isaiah 41:4 Who has prepared and done this, calling forth and guiding the destinies of the generations [of the nations {and their peoples}] from the beginning? I, the Lord–the first [existing before history began] and with the last [an ever-present, unchanging God]–I am He. AMP 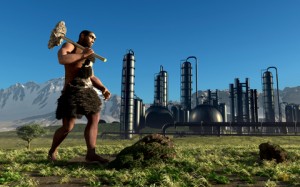 We now come to the dawning of different entities/industries and the “technology” that is used by them to continue the expansion of civilization around the world. I define technology as, “man using his superior knowledge to develop technological mechanisms to use God created resources to develop and accomplish and/or further the desires and needs of his heart and the societies of the world.” I continually marvel at the intellect of man and the ingenuity of how he uses existing resources to keep bringing forth new innovations which result in new consumer products affecting our daily lives. The trouble with technology is that it produces both good things that help people and society and bad things that are evil in nature and produce the degradation that sin brings into the lives of the people and their societies of the world. I think it is fascinating how Satan, Cain, and Nimrod brought into creation the “kingdom(s) of the world” their civilizations, their societies, and their industries, and how they progressed through time and place in history, but yet man’s knowledge and the technology that goes with it gradually changed from the creation of man through the mid-18th century {1750’s} which brought the advent of the “Industrial Revolution” in Britain. Today – 2014 – is TOTALLY different! Man’s knowledge and the technology accompanying it doubles every 12-18 months. Amazing!!!

Let’s take a look at the third child of Eve – Enoch – and his offspring – Lamech – and what his offspring contributed to civilization. From Genesis 4:18 To Enoch was born Irad, and Irad was the father of Mehujael, and Mehujael was the father of Methushael, and Methushael was the father of Lamech. 19 Lamech married two women, one named Adah and the other Zillah. 20 Adah gave birth to Jabal; he was the father of those who live in tents and raise livestock.
Jabal was the forerunner of the “Agricultural Industry” – which provides fruits, vegetables, meat, skins/hides, eggs, milk, dairy products, etc., and the technology that is needed to efficiently produce these food products resulting in commerce that sustain human life around the world.

21 His brother’s name was Jubal; he was the father of all who play the harp and flute.

Jubal was the forerunner of the “Humanities Industry” which provide humans with their schooling, their education – knowledge and wisdom about human culture, its history, its literature, the arts, philosophy, music, medicine, etc. and the technology that provides the resources for all of the facilities that further the intellect and education of man.

22 Zillah also had a son, Tubal-Cain, {the father} who forged all kinds of tools out of bronze and iron. Tubal-Cain’s sister was Naamah.

Tubal-Cain was the forerunner of the “Industrial Industries” involving and applying technology in the discovering of the minerals found in the earth and the mining of their ores, and then the processing of those minerals to produce products that help to sustain and further commerce and mankind around the world. These three men brought forth the foundations of agriculture, education, and industry that we know and use “TODAY.”

23 Lamech said to his wives, “Adah and Zillah, listen to me; wives of Lamech, hear my words. I have killed a man for wounding me, a young man for injuring me. 24 If Cain is avenged seven times, then Lamech seventy-seven times.”
25 Adam lay with his wife {Eve} again, and she gave birth to a son and named him Seth, saying, “God has granted me another child in place of Abel, since Cain killed him.
26 Seth also had a son, and he named him Enosh. At that time men began to call on the name of the Lord {Something that had never happened before, man now started to earnestly believe in and pray to God.}. NIV

We now close one of the most expansive times of human intellect in early human history.