In Genesis 2, God laid out the rules for the Garden of Eden to Adam then He formed Eve from Adam’s side. I believe that BOTH Adam and Eve were “naïve/innocent/unknowing” in their mind-set and character BEFORE God introduced them to the “serpent” {the great opposer, adversary, and deceiver of man and angels – Satan} in the Garden of Eden in Genesis Chapter 3. Satan was very wise, calculating, deceptive, and yet charismatic, and he mentally seduced, caused mental confusion, and out smarted Eve and deceived both Eve and Adam into sinning by disobeying God’s commands in Chapter 2. This was NOT a “fair” matchup, but this is what had to happen to bring to fruition God’s foreknown and predestined plans for the curse of sin to fall upon man, His creatures, and creation!
Genesis 2:16-17 And the Lord God commanded the man, saying, You may freely eat of every tree of the garden; 17 But of the tree of the knowledge of good and evil and blessing and calamity you shall not eat, for in the day that you eat of it you shall surely die. AMP
Genesis 2:21-22 And the Lord God caused a deep sleep to fall upon Adam; and while he slept, He took one of his ribs or a part of his side and closed up the [place with] flesh. 22 And the rib or part of his side which the Lord God had taken from the man He built up and made into a woman, and He brought her to the man. AMP
Genesis 3:1 NOW THE {spiritual in nature but now with a visible physical countenance} serpent was more subtle and crafty than any {physical} living creature of the field which the Lord God had made. And he [Satan] said {sarcastically/mockingly/enticingly} to the {innocent} woman, Can it really be that God has said, You shall not eat from every tree of the garden? [Rev 12:9-11.] AMP
Genesis 3:2-5 “Of course we may eat it,” the woman told him. “It’s only the fruit from the tree at the center of the garden that we are not to eat. God says we mustn’t eat it or even touch it {God the Son did NOT say they could not touch the tree.}, or we will die.” 4 “That’s a lie!” the serpent hissed. “You’ll not die! 5 God knows very well that the instant you eat it you will become like him, for your eyes will be opened-you will be able to distinguish good from evil!” TLB 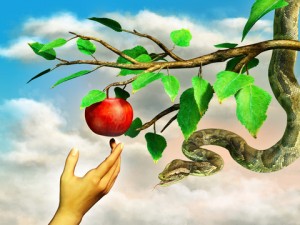 © she took of its fruit and ate…

Genesis 3:6 And when the woman saw that the tree was good (suitable, pleasant) for food and that it was delightful to look at, and a tree to be desired in order to make one wise, she took of its fruit and ate; and she gave some also to her husband, and he ate. AMP
Genesis 2:17 But of the tree of the knowledge of good and evil and blessing and calamity you shall not eat, for in the day that you eat of it you shall surely die {be eternally separated from Me spiritually and die physically}. AMP
Romans 8:20-21 For the {rest of physical} creation was subjected to frustration {death AND decay}, not by its own choice, but by the will of the one {God} who subjected it, in hope 21 that the creation itself will be liberated from its bondage to decay {turning back to dirt} and brought into the glorious freedom of the children of God {upon their redemption}. NIV

I have always felt sorry for Adam and Eve. In their innocence BOTH physical and spiritual, God set them up as “pawns” against an extremely formidable and wicked SPIRITUAL foe in Satan – a foe they could NOT have had victory over any more than you or I could have! God KNEW Satan’s capacity to sin and his charismatic ability to draw others – fellow angels and now man – into his devious and eternally destructive and sinful plans of ruling the only inhabited planet in the universe – the earth.
Revelation 12:4 His {Satan’s} tail swept [across the sky] and dragged down a third of the stars {sinful fallen demonic angel cohorts} and flung them to the earth {to eventually minister with him against God’s offspring in the nations and “kingdom(s) of the world”}….. AMP
Ephesians 2:2 In which at one time you walked [habitually]. You were following the course and fashion of this world [were under the sway of the tendency of this present age], following the prince of the power of the air. [You were obedient to and under the control of] the [demon] spirit that still constantly works in the sons of disobedience [the careless, the rebellious, and the unbelieving, who go against the purposes of God]. AMP
1 John 5:19 We know [positively] that we are of God, and the whole world [around us] is under the power of the evil one. AMP
Isaiah 45:18 For thus says the Lord–Who created the heavens, God Himself, Who formed the earth and made it, Who established it and did not create it to be a worthless waste; He formed it to be inhabited–I am the Lord, and there is no one else. AMP

Scripture shares with us that Satan made the claim to Jesus – which Jesus did NOT deny nor refute – that from the time he was cast to the earth and because of Adam and Eve’s sinning through Christ’s Second Coming all of the authority and splendor of the physical kingdoms of the world had been given to Satan. But Jesus Christ/God the Son did NOT accept Satan’s offer to worship him because it was He Who had the authority, power, and splendor of the spiritual supernatural Kingdom of God. Christ also knew that at the end of the age, He would reconcile His Saints of the “kingdom(s) of the world” to His Kingdom.
Luke 4:5-7 The devil {Satan} led him {Jesus} up to a high place and showed him in an instant all the kingdoms of the world. 6 And he said to him, “I will give you all their authority and splendor, for it has been given to me, and I can give it to anyone I want to. 7 So if you worship me {as your god}, it {the authority and splendor of the physical kingdoms of the world} will all be yours.” NIV
Luke 4:8 And Jesus replied to him, Get behind Me, Satan! It is written, You shall do homage {pay respect} to and worship the Lord your God {Jesus was talking about Himself}, and Him only shall you serve. [Deut 6:13; 10:20.] AMP
Colossians 1:12-13 and always thankful to the {God the} Father who has made us fit to share all the wonderful things that belong to those who live in the Kingdom of light {God’s Kingdom is light}. 13 For he has rescued us out of the darkness and gloom of Satan’s kingdom {of the physical world} and brought us into the {spiritual} Kingdom {of God} of his dear Son, TLB
John 8:12 Once more Jesus addressed the crowd. He said, I am the Light of the world. He who follows Me will not be walking in the dark, but will have the {Kingdom of} Light which is Life. AMP
Revelation 11:15 The seventh angel then blew [his] trumpet, and there were mighty voices in heaven, shouting, The dominion (kingdom, sovereignty, rule) of the world has now come into the possession and become the kingdom of our Lord and of His Christ (the Messiah), and He shall reign forever and ever (for the eternities of the eternities)! [Ps 22:28; Dan 7:13,14, 27.] AMP