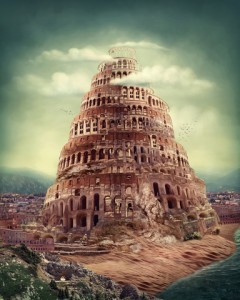 Noah and his family did exceedingly well at repopulating the earth! But we now a crisis that caused God to come down to the earth to the city of Babel with its Tower of Babel. This crisis caused God to confuse man’s language and scatter him over the face of the earth so as to stop man from prematurely bringing forth the “One World Government” with its “One World Religion.”
Genesis 11:6-9 And the Lord said, Behold, they are one people and they have all one language; and this is only the beginning of what they will do, and now nothing they have imagined they can do will be impossible for them. 7 Come, let Us {God the Son and God the Holy Spirit} go down and there confound (mix up, confuse) their language, that they may not understand one another’s speech. 8 So the Lord scattered them abroad from that place upon the face of the whole earth, and they gave up building the city. 9 Therefore the name of it was called Babel — because there the Lord confounded the language of all the earth; and from that place the Lord scattered them abroad upon the face of the whole earth. AMP

What God showed here was that in His Sovereignty and Providence, He can take whatever hiccup, bump in the road, whatever you want to call sinful man’s thoughts, intentions, and actions of his mind and heart – his “wiggle room” using his intellect, emotions, free will, and his decision making in sinning against God and realign them into bringing to fruition God’s foreknown and predestined plans.
Proverbs 16:25 There is a way that seems right to a man and appears straight before him, but at the end of it is the way of death. AMP
Proverbs 30:12 There is a class of people who are pure in their own eyes, and yet are not washed from their own filth. AMP
Psalms 36:1-4 TRANSGRESSION [like an oracle] speaks to the wicked deep in his heart. There is no fear or dread of God before his eyes. [Rom 3:18.] 2 For he flatters and deceives himself in his own eyes that his iniquity will not be found out and be hated. 3 The words of his mouth are wrong and deceitful; he has ceased to be wise and to do good. 4 He plans wrongdoing on his bed; he sets himself in a way that is not good; he does not reject or despise evil. AMP
Jeremiah 2:35 Yet you keep saying, I am innocent; surely His anger has turned away from Me. Behold, I {God} will bring you to judgment and will plead against you because you say, I have not sinned. AMP
2 Corinthians 13:5 Examine and test and evaluate your own selves to see whether you are holding to your faith and showing the proper fruits of it. Test and prove yourselves [not Christ]. Do you not yourselves realize and know [thoroughly by an ever-increasing experience] that Jesus Christ is in you — unless you are [counterfeits] disapproved on trial and rejected? AMP
Isaiah 46:9-10 [Earnestly] remember the former things, [which I did] of old; for I am God, and there is no one else; I am God, and there is none like Me, 10 Declaring the end and the result from the beginning, and from ancient times the things that are not yet done, saying, My counsel shall stand, and I will do all My pleasure and purpose, AMP

God took Cain’s initial building of a city – his putting down of his physical roots – his starting the humanistic secular “kingdom(s) of the world” and ended the building of that regional city/government at the “Tower of Babel.” It MUST be remembered that even though God confused the language of the people and scattered them over the face of the earth, their mind-set and spiritual heart was not changed – it was still to make the earth their permanent home and their “god!” God’s action at that time did NOT stop the desires of the future generations of sinful man from forming a “One World Government” with its “One World Religion” BEFORE its appointed time. By God’s scattering of the people over all the face of the earth, He assured that His foreknown and predestined plans for a “One World Wide Government” and a “One World Wide Religion” would come about at His right time and place in history just BEFORE Christ’s Second Coming which I will discuss later.