CHAPTER 11 – NOAH, A “RIGHTEOUS MAN of GOD” in the “kingdom(s) of the world.” – Profane Mystery Worldview Revealed
»
« 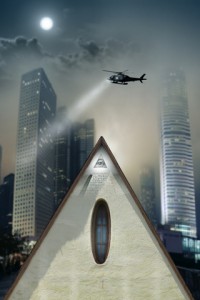 © NEW WORLD ORDER with its goal of a One World Government and One World Religion.

Let’s continue to watch the “two kingdoms” continue to unfold and their advancement throughout history towards the NEW WORLD ORDER with its goal of a “One World Government” and “One World Religion,” and the emergence and revealing of the eternal spiritual supernatural “Kingdom of God” which the Bible reveals is upon us.

The evil and wickedness of sinful unrepentant man continues to bring crises in early human history. In Genesis Chapter 6 when sin became so rampant that God said He was sorry that He had created man and that He was going to blot him and all other land based creatures {BUT not the creatures of the waters} from the face of the earth.
Genesis 6:5-7 The Lord saw that the wickedness of man was great in the earth, and that every imagination and intention of all human thinking was only evil continually. 6 And the Lord regretted that He had made man on the earth, and He was grieved at heart. 7 So the Lord said, I will destroy, blot out, and wipe away mankind, whom I have created from the face of the ground — not only man, [but] the beasts and the creeping things and the birds of the air — for it grieves Me and makes Me regretful that I have made them. AMP

What we MUST realize and understand is how repugnant the evil and wickedness of SIN is to God. SIN is a COMPLETE, UTTER, and ABSOLUTE ABOMINATION to the holy, righteous, living, loving, and unchanging God! God’s destroying of His creation by the Flood BECAUSE of the unrepented SINS of man was probably the closest God in His righteous anger ever came to saying, “OOPS, I am sorry that I made the earth and its role in man’s mind-set and spiritual heart!”
Isaiah 5:16 But the Lord of hosts will be exalted in judgment, And the holy God will show Himself holy in righteousness. NASU
Malachi 3:6 For I am the Lord, I do not change; that is why you, O sons of Jacob, are not consumed. AMP
Genesis 8:21 When the Lord smelled the pleasing odor [a scent of satisfaction to His heart], the Lord said to Himself, I will never again curse the ground because of man, for the imagination (the strong desire) of man’s heart is evil and wicked from his youth; neither will I ever again smite and destroy every living thing, as I have done. AMP
Isaiah 45:18 For thus says the Lord — Who created the heavens, God Himself, Who formed the earth and made it, Who established it and did not create it to be a worthless waste; He formed it to be inhabited — I am the Lord, and there is no one else. AMP
2 Thessalonians 2:9-12 The coming of the lawless one is according to the working of Satan, with all power, signs, and lying wonders, 10 and with all unrighteous deception among those who perish, because they did not receive the love of the truth, that they might be saved. 11 And for this reason God will send them strong delusion {which is the “kingdom(s) of the world” and creation itself}, that they should believe the lie {and worshiped the kingdoms and the creation rather than the Creator}, 12 that they all may be condemned who did not believe the truth but had pleasure in unrighteousness {worshiping the “kingdom(s) of the world” and its god – Satan}. NKJV

BUT there still remained ONLY one man on the entire earth whom God considered as righteous with his family and that man was Noah! His wife, their three sons, and their wives also were included so they could repopulate the earth when the time came. But God found Noah to be the ONLY righteous man on the face of the earth just prior to the Flood.
Genesis 6:8-10, 18 But Noah found grace (favor) in the eyes of the Lord. 9 This is the history of the generations of Noah. Noah was a just and righteous man, blameless in his [evil] generation; Noah walked [in habitual fellowship] with God. 10 And Noah became the father of three sons: Shem, Ham, and Japheth.
18 But I will establish My covenant (promise, pledge) with you, and you shall come into the ark — you and your sons and your wife and your sons’ wives with you. AMP
Genesis 7:1 The Flood Then the Lord said to Noah, “Enter the ark, you and all your household, for you alone I have seen to be righteous before Me in this time. NASU

The Bible continues to reveal to us the “Kingdom of God” and those who will be righteous co-heirs of it. Noah became the SECOND man to represent the physical “wandering remnant” while he was afloat on the waters in the Ark for some months. He also became the FIRST man of the spiritual righteous “wandering remnant” of the Kingdom of God in the “kingdom(s) of the world” – those who by faith and trust in God willingly followed God’s commands that would fulfill His foreknown and predestined plans in bringing them into heir-ship in the eternal spiritual supernatural Kingdom of God.
Romans 8:17 Now if we are {righteous} children {of God}, then we are heirs — heirs of God and co-heirs with Christ, if indeed we share in his sufferings in order that we may also share in his glory. NIV
Genesis 6:9 This is the history of the generations of Noah. Noah was a just and righteous man, blameless in his [evil] generation; Noah walked [in habitual fellowship] with God. AMP
Hebrews 11:7 [Prompted] by faith Noah, being forewarned by God concerning events of which as yet there was no visible sign, took heed and diligently and reverently constructed and prepared an ark for the deliverance of his own family. By this [his faith which relied on God] he passed judgment and sentence on the world’s unbelief and became an heir and possessor of righteousness (that relation of being right into which God puts the person who has faith). [Gen 6:13-22.] AMP 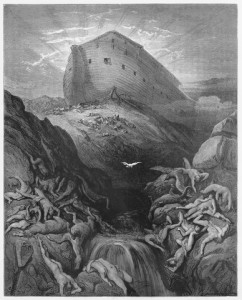 © Noah, being forewarned by God…

Let’s watch Noah’s faith in action as he built the Ark. We know that in building the Ark Noah must have incurred a lot of heckling and ridicule because the Bible shares with us that prior to Noah’s time, it had never rained which would have produced rivers and lakes. Why was he building something as stupid, utterly insane, and unnecessary as something that could “float” on WHAT?
James 2:14, 17 What is the use (profit), my brethren, for anyone to profess to have faith if he has no [good] works [to show for it]? Can [such] faith save [his soul]?
17 So also faith, if it does not have works (deeds and actions of obedience to back it up), by itself is destitute of power (inoperative, dead). AMP
Genesis 6:22 Noah did this; he did all that God commanded him. AMP
Genesis 2:4-6 This is the history of the heavens and of the earth when they were created. In the day that the Lord God made the earth and the heavens — 5 When no plant of the field was yet in the earth and no herb of the field had yet sprung up, for the Lord God had not [yet] caused it to rain upon the earth and there was no man to till the ground, 6 But there went up a mist (fog, vapor) from the land and watered the whole surface of the ground. AMP
Genesis 7:11-12 In the year 600 of Noah’s life, in the seventeenth day of the second month, that same day all the fountains of the great deep were broken up and burst forth, and the windows and floodgates of the heavens were opened. 12 And it rained upon the earth forty days and forty nights. AMP

We all know the story of Noah. Of God telling him to build an ark along with its specific dimensions and the specified creatures and supplies that were to be in it. God told Noah that he was going to destroy man because of his great propensity to sin and would include all of the land and its creatures.
Genesis 6:11-13 The earth was depraved and putrid in God’s sight, and the land was filled with violence (desecration, infringement, outrage, assault, and lust for power). 12 And God looked upon the world and saw how degenerate, debased, and vicious it was, for all humanity had corrupted their way upon the earth and lost their true direction. 13 God said to Noah, I intend to make an end of all flesh, for through men the land is filled with violence; and behold, I will destroy them and the land. AMP

But Noah by faith followed God’s commands and when all of the creatures and supplies had entered the ark, God HIMSELF closed the only entry/exit door.
Genesis 7:5 And Noah did all that the Lord commanded him. [Heb 11:7.] AMP
Genesis 7:16 And they that entered, male and female of all flesh, went in as God had commanded [Noah]; and the Lord shut him in and closed [the door] round about him. AMP

Noah’s faith and willing action because of his faith set him apart as the SECOND person of the “wandering remnant” of the Kingdom of God in the “kingdoms of the world.” This greatly pleased God as we have seen when He called Noah “righteous.” God then blessed Noah and his family commanding them to repopulate the earth.
Genesis 6:9 This is the history of the generations of Noah. Noah was a just and righteous man, blameless in his [evil] generation; Noah walked [in habitual fellowship] with God. AMP
Genesis 9:1 AND GOD pronounced a blessing upon Noah and his sons and said to them, Be fruitful and multiply and fill the earth. AMP
Genesis 9:7 {God said,} And you {Noah and his sons}, be fruitful and multiply; bring forth abundantly on the earth and multiply on it. AMP